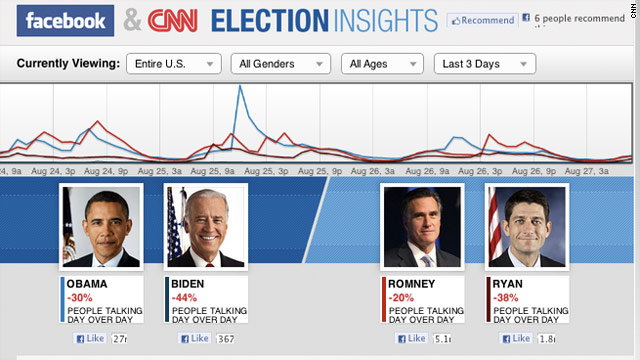 Facebook-CNN Election Insights — found at CNN.com/FBinsights— displays dynamic, real-time charts and visualizations using Facebook Insights to gauge the volume of Facebook activity surrounding the election and candidates. CNN will use the tool, which also allows people to view data by geography and demography, during their coverage of the presidential election.

Working with social integration platform Mass Relevance, Facebook and CNN have created an experience that allows people to:

· View trends about how many people are talking about each of the candidates across the United States.

· Understand distinctions between who is talking about which candidates in those states — male vs. female, and by age group.

· Contribute to the ongoing conversation via a Facebook Comments plug-in.

Facebook-CNN Election Insights will be used during CNN broadcasts, including regular segments on CNN’s “The Situation Room with Wolf Blitzer” as well as in CNN.com and CNN Mobile campaign coverage. Notably, CNN’s daily “Political Gut Check” newsletter and the U.S. Politics on Facebook Page will feature highlights from the tool.

“We are excited to build on our long relationship with Facebook to transform social media conversation into real-time data,” said CNN Digital SVP KC Estenson. “By teaming up with Facebook and Mass Relevance, we can effectively gauge the buzz surrounding this election and deliver it to CNN Digital users, literally as it’s happening.”

“Facebook is naturally a place where friends engage in political discourse, and we’re pleased to announce that the Facebook-CNN Election Insights tool will offer an interactive, real-time glimpse into how and where this conversation is taking place across the country,” said Elliot Schrage, Vice President-Corporate Communications & Public Policy at Facebook.

Today’s launch builds on a previously announced multi-platform partnership between CNN and Facebook intended to bring an interactive and uniquely social experience to CNN’s on-air, mobile and online audiences and Facebook’s more than 160 million U.S. users. The Facebook-CNN Election Insights tool is powered by Facebook Insights and was designed and developed by Mass Relevance, a social integration firm that specializes in the curation and display of real-time social content.

Earlier this summer, CNN and Facebook announced the joint creation of an “I’m Voting” application that enables people using Facebook to commit to voting, endorse specific candidates and positions, and see how their choices compare to what their friends are saying. Responses are visually displayed on an interactive map of the United States. The app, available in English and Spanish, was launched last week and can be found at Facebook.com/ImVoting.

Facebook-CNN Election Insights Methodology: Facebook-CNN Election Insights uses Facebook Page Insights and the metric “People Talking About This” (PTAT), supplemented with aggregate mentions, to gauge the volume of unique people talking about the candidates on Facebook each day. The data provided is aggregate and anonymous. The basic version of PTAT displayed on every Facebook Page is based on users’ “likes” (of a page, a page post, or other page content), comments, and tags over the last seven days.

About Facebook: Launched in February 2004, Facebook is a social utility that gives people the power to share and make the world more open and connected. Facebook has connected more than 900 million people around the world and has played a role in encouraging civic and political engagement. Governments, lawmakers, and political campaigns around the world are using Facebook to communicate authentically with citizens in ways unimaginable a decade ago.

About CNN: About CNN: CNN Worldwide, a division of Turner Broadcasting System, Inc., a Time Warner Company, is the most trusted source for news and information. For more than 5 consecutive years, CNN Digital has remained No. 1 in mobile news with an average of more than 21 million unique visitors per month. CNN’s applications for iPhone, iPad, Nokia, Windows 7 phone, and Android phone & tablet have been downloaded more than 22 million times to date. With 3.7 million Facebook fans and nearly 6 million Twitter followers of @CNN, 8.5 million @CNNBRK followers, and more than 30 million followers across all network handles, CNN is the most followed news organization on social media and has more followers than any other cable brand.

About Mass Relevance: Mass Relevance enables entertainment, media, retail, and manufacturing brands to drive real-time engagement through social curation and integration. The company provides a flexible, robust platform to facilitate audience and consumer interactions in a relevant, moderated way that is proven to deliver measurable results. The company serves more than 130 clients including the “Big Four” television networks, 7 of the top 10 2011 cable networks, as well as top brands like Ford, Target, Universal Pictures, MTV, Samsung, Patagonia, Pepsi, GE and Victoria’s Secret. The company is privately held with venture capital funding.