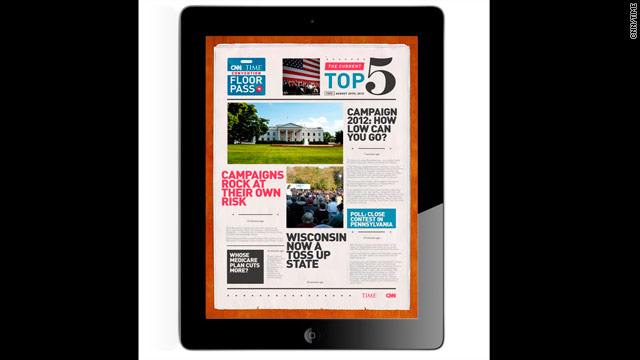 Time Warner Inc. today announced the launch of the CNN-TIME Convention Floor Pass app, the ultimate mobile tool for the 2012 political conventions. The app will feature 24/7 breaking news updates and alerts, daily analysis and commentary, exclusive early access to CNN-TIME polls, photos and video from CNN and TIME journalists on the ground at the Republican and Democratic National Conventions. CNN-TIME Convention Floor Pass will be a must download for convention attendees in Charlotte and Tampa and will provide non-attendees a virtual ticket to the convention hall floors.

News and Analysis: Tapping the nation’s top political talent from CNN and TIME, Convention Floor Pass keeps users in the know with breaking news alerts, daily analysis and commentary, and a constant stream of articles and multimedia features from the 2012 conventions. By selecting a section from the sidebar, users can choose whether to dive deep with up to 50 stories from the app’s “News Feed” or visit the app’s “Top 5,” a digital front page showcasing the five stories driving the news each day. In addition, the app will feature a special morning edition of CNN’s Political Gut Check.

TIME Cover of the Day: Each day of the conventions, TIME will release a cover of the day and corresponding cover story featuring news and analysis from the conventions. This is the first time in TIME’s history that the magazine has released a daily cover image.

Speeches: A multimedia library of convention speeches given by legislators and newsmakers from both sides of the aisle can be accessed through the application’s “Speeches” tab.

Guide, Maps & Local Info: A continually-updated “Guide” section provides users with a calendar of events, parties and other convention activities. Maps of the St. Petersburg Times Forum in Tampa, as well as the Time Warner Cable Arena and Bank of America Stadium in Charlotte can be found on the app’s “Map” page. A “Local Info” tab presents a list of the bars, restaurants, coffee shops, taxi services, and retail near the convention halls in both cities.

Social Central: A “Social” tab directs users to a dashboard of election Twitter buzz that can be filtered by convention-related hash tags. Twitter and foursquare users can tweet and check-in from directly within the app. Additionally, a “CNN iReport” tab provides a direct gateway to CNN’s social media community for news, enabling users to browse user-generated content, register, sign-in to their account or sign on as a guest to share their photos and videos from the conventions.

Visit iTunes for more information about the CNN-TIME Convention Floor Pass for iPad and iPhone, Google Play for Android or http://floorpass.time.com for mobile web access.

About CNN: CNN Worldwide, a division of Turner Broadcasting System, Inc., a Time Warner Company, is the most trusted source for news and information. For more than 5 consecutive years, CNN Digital has remained No. 1 in mobile news with an average of more than 21 million unique visitors per month. CNN’s applications for iPhone, iPad, Nokia, Windows 7 phone, and Android phone & tablet have been downloaded more than 22 million times to date. With nearly 6 million followers of @CNN, 8.5 million @CNNBRK followers, and more than 30 million followers across all network handles, CNN is the most followed news organization on social media and has more followers than any other cable brand.

About TIME: TIME is a global multimedia brand that reaches more than 50 million people and includes the domestic and international magazine editions, tablet versions for iPad, Galaxy, Kindle and Nook, TIME for Kids, TIME.com and mobile. TIME.com draws nearly 10 million unique visitors a month and has more than 3.8 million Twitter followers and one million Google+ followers. TIME leads the mobile app space with more than 4.5 million total app downloads across all platforms, including iPhone, Blackberry and Android.