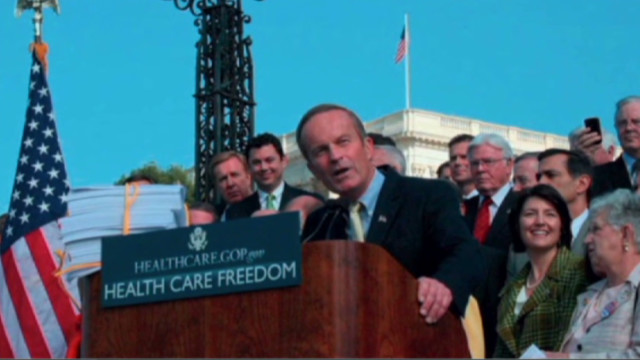 RNC chair says Akin should drop out, funding has been pulled

Republican National Committee Chairman Reince Priebus told CNN’s Wolf Blitzer that Todd Akin should drop out of the Missouri Senate race and that his funding has been pulled. A highlight from the interview is below and a full transcript will be posted on http://archives.cnn.com/TRANSCRIPTS/2012.08.21.html. This interview aired today on CNN’s The Situation Room with Wolf Blitzer in the 4 p.m. ET hour.

Highlight from the Interview
THIS IS A RUSH FDCH TRANSCRIPT. THIS COPY MAY NOT BE IN ITS FINAL FORM AND MAY BE UPDATED

BLITZER: Let’s bring in the chairman of the Republican National Committee, Reince Priebus.  He’s joining us now live from Tampa.  Reince, thanks very much for coming in.  Are you overreacting?  Because you want him to go away.

REINCE PRIEBUS, CHAIRMAN, REPUBLICAN NATIONAL COMMITTEE: I think he should step aside.  I mean, here’s the deal, the unique situation here, though, is not just somebody who said somebody that’s biologically stupid, but it’s something who said something at a time when we can actually replace him on the ticket in a real, legal way that is going to be a stronger candidate than what Todd Akin is going to be.

I mean, he’s got no one to blame but himself.  I mean, he’s put himself in a weaker position.  And we have a legal avenue now that we can put someone in his place that’s going to be stronger.  I mean, that’s what we’re talking about.

Now, what he said is ridiculous and bizarre, but we have a chance to not continue down this pathway of having this major distraction in that Senate seat.

BLITZER: So if he stubbornly says, you know what, the Republican primary elected me. I’m going to listen to the people of Missouri, and he stays in this race, can he win?  Can he beat Claire McCaskill?

PRIEBUS: That will be pretty tough to do without any money.

BLITZER: Will the RNC suspend any campaign fundraising for him?

PRIEBUS:  Yes.  I mean, we’re not going to send any money toward that race or spend money on the ground in that particular race.  We’re obviously going to work very hard for a nominee in Missouri up and down the ticket, congressional seats.  But I’ve already called off the phone banks and all of the volunteers for Congressman Akin’s race there.

So it’s up to him.  He’s got an hour-and-a-half.  And it’s up to him.  I think he ought to do the right thing for this country and get out of the race.  But we’ll see what happens.  But otherwise, no, we’re not going to spend money in his race in Missouri.