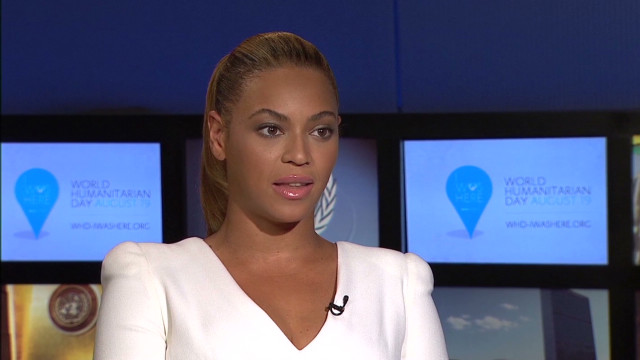 Last week Anderson Cooper sat down with superstar Beyonce and UN Emergency Relief Coordinator Valerie Amos to discuss World Humanitarian Day. Cooper sat down with Beyonce hours before the star took the stage on August 10 at the United Nations General Assembly Hall to sing for an audience that included a mix of celebrities and ambassadors.

The crowd watched her perform “I Was Here” from her album “4,” released in 2011. The lyrics express a desire to make an impact in the lives of others: “The hearts I have touched will be the proof that I leave, that I made a difference and this world will see, I was here.”

Anderson asked Beyonce about the song, which she is dedicating to the recognition of World Humanitarian Day. “It says, ‘I want to leave my footprints in the sands of time’ and it basically is all of our dreams, I think. And that’s leaving our mark on the world. I feel like we all want to know that our life meant something,” she explained. It’s a message she hopes will resonate and inspire acts of kindness around the world.

The show will be used as a music video released on August 19 to mark World Humanitarian Day. The U.N.’s website for the campaign is asking people to add their voice as part of a social media effort to raise awareness. There are also suggestions of how to “do something good somewhere for someone else.”

“We all have our purpose, and we all have our strengths…it feels so wonderful to do something for someone else. And I think for the U.N. to want to include the whole world was something important, and I feel like that’s what I represent,” Beyonce told Anderson.

During the interview, Anderson asked Valerie Amos about their goal of reaching one billion people, and partnering with Beyonce. “This is really about saying to everyone out there that this is a day that’s both a commemoration because there are a lot of people who lose their lives trying to help people. But it’s also a celebration of the things that people do,” Amos said.

Please see select sound bites from their interview below.  The full interview airs tonight on Anderson Cooper 360° at 8 &10pm ET.

Beyonce:  I Was Here, it says I want to leave my footprints in the sands of time and it basically is all of our dreams I think and that’s leaving a mark on the world.  I feel like we all want to know that our life meant something and that we did something for someone else and we spread positivity no matter how big or how small, so the song was perfect for humanitarian day.

Anderson Cooper: and is that what you want too, to spread positivity?

Beyonce:  Absolutely. I feel like we all have our purpose and we all have our strengths and I don’t know if its selfish or unselfish but it feels so wonderful to do something for someone else and I think that for the UN to want to include the whole world is something important and I feel like that’s what I represent.

Anderson Cooper: Do you worry, I mean people who watch the news and they see the slaughter in Syria, they see the humanitarian crisis there now, they see what’s happening in eastern Congo where millions of people died over the years, a lot of times people feel hopeless, and helpless.  Valerie, how do you counteract that?

Valerie Amos:  That’s the whole message that we’re trying to get across today, which is that you can make a small contribution which will make a huge difference, //  But lets not forget there are people right here in the united states.  There are people across the world who are doing things every single day, helping people who are homeless for example, lots of little things that people do.  And one of the messages out of world humanitarian day is that we can make a difference.  We can make a difference out of a small act.

Anderson Cooper:  So on August 19th you’re both hoping that people around the world will do whatever they can, will volunteer in their communities, will donate money, will donate time, whatever it is?

Anderson Cooper:   Do you know what you hope to do on that day?

Beyonce:  Well I thought of many diff things, I know one thing I’m going to start working on now, every day I’m going to try to do something and basically give examples of acts of kindness that I think people will gravitate towards and feel like they can do. Even if it’s something as small as feeding the homeless or giving a coat to someone who needs it or helping the elderly across the street.