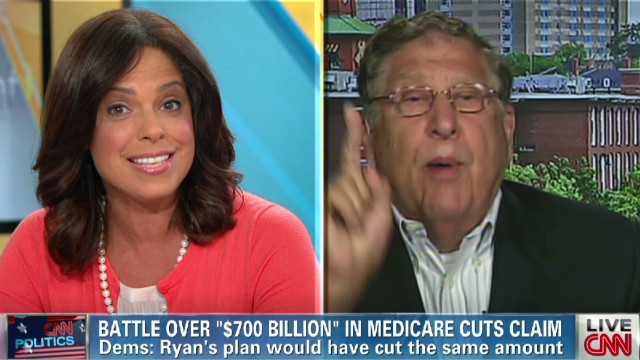 Former Governor John Sununu (R-NH) and CNN Anchor Soledad O’Brien debate the impacts of President Obama, Romney and Ryan plans on Medicare. Sununu argues that President Obama’s plan reduces services and support, while O’Brien points out that there is a reduction in expected rate of growth.

O’Brien: “I understand that this is a Republican talking point because I’ve heard it repeated over and over again. And these numbers have been debunked as you know by the Congressional Budget Office.”
Sununu: “No they haven’t.”
O’Brien: “Yes, they have.”
Sununu: “I have the Congressional Budget Office Budget report right here…. Go read page 113 and 114.”
O’Brien: “I can tell you what it says. It cuts a reduction in the expected rate of growth, which you know.
Sununu: “No ma’am.”
O’Brien: “Not cutting benefits to the elderly. Benefits will be improved. The focus is on hospitals. The focus is on health insurance.”
Sununu: “He gutted the program by $711 million.”
O’Brien: “Expected rate of growth is being cut.”
Sununu: And the fact is he reduces services to Medicare beneficiaries currently on the package. What the difference is, is that Romney says no impact to anybody 55 and over. It is clear in here that the reduction of services start on January 1, 2013 and [Pres.] Obama stole that money to put it into programs under Obamacare ….”
O’Brien: “The hospitals agreed to that. The drug providers agreed to that because their theory is that what they’re going to be able to do is make up by the number of people who come into the system. It doesn’t reduce or cut the benefits. Right….”
Sununu: “Soledad – stop this. All you’re doing is mimicking the stuff that comes out of the White House and gets repeated on the Democratic blog boards out there….”
O’Brien: I’m telling you what FactCheck.com tells you. I’m telling you what the CBO tells you. I’m telling you what CNN’s independent analysis does.”
Sununu: “I got the CBO report right here.”
O’Brien: And I’m telling you what it says. I’ve read it several times.”
Sununu: Put an Obama bumper sticker on your forehead when you do this.”
O’Brien: You know. Let me tell you something. There is independent analysis that details what this about and repeating a number —
Sununu: No there isn’t.
O’Brien: Yes there is.
Sununu: No, there’s Democratic analysis.
O’Brien: Sir, let me finish. There’s independent analysis. FactCheck.com, the CBO and CNN has also done its own independent analysis and name calling to me and somehow acting as if by you repeating a number of $716 billion that you can make that stick when that figure is being stolen from Medicare – that’s not true….”
Sununu: It’s says it’s a reduction in services and a reduction in support for Medicare advantage.
O’Brien: A reduction in the expected rate of growth.”