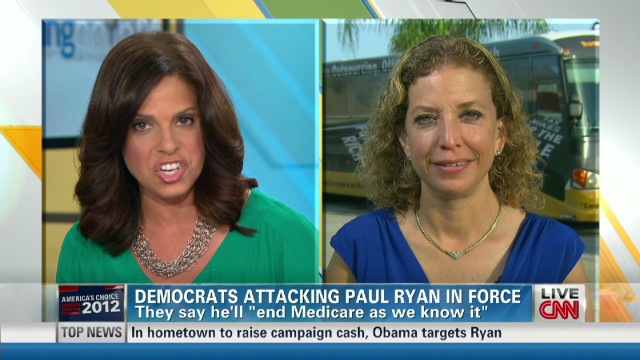 Rep. Wasserman Schultz says, “Well, what makes severely conservative extreme Republicans delighted makes seniors here in my home state of Florida really gravely concerned and rightfully so as well as the middle class, because Mitt Romney’s full embrace of the Ryan budget by actually nominating and selecting its author and architect to be his running mate really spells disaster for the middle class, spells disaster for seniors, because Mitt Romney and Paul Ryan both want to end Medicare as we know it. They both want to shred the safety net that is the Medicare healthcare safety net for seniors that’s been in place for more than 50 years that would add more than $6,000 in premiums under Paul Ryan’s proposal that Mitt Romney has embraced to seniors premiums in Medicare and that would really force us back to the days for senior that would — that had them choosing between medicine and meals and had them choosing between healthcare and paying their rent and literally surviving. It’s unacceptable. It’s devastating and it’s another clear picture where Mitt Romney stands.”