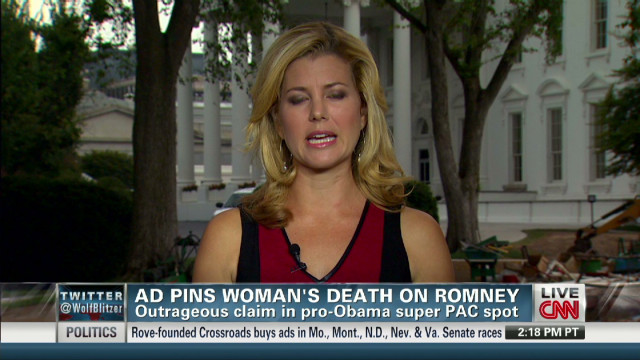 In a package that aired on CNN’s The Situation Room with Wolf Blitzer, CNN White House correspondent Brianna Keilar finds that a new attack ad linking Romney to the death of a woman, by a Super PAC backing President Obama, is not accurate. A transcript of Keilar’s report is after the jump.

TRANSCRIPT
THIS IS A RUSH FDCH TRANSCRIPT. IT MAY NOT BE IN ITS FINAL FORM AND MAY BE UPDATED.

BLITZER:  A new attack ad by a Super PAC backing President Obama basically blames Mitt Romney for a woman’s death from cancer after his company, Bain Capital, shut down the steel mill where the woman’s husband worked. Let’s go to our White House correspondent, Brianna Keilar. She’s watching the story for us.

BRIANNA KEILAR, CNN WHITE HOUSE CORRESPONDENT: It does when you dig deeper here, Wolf, because this ad makes it sound like this woman passed away shortly after Bain Capital closed down the steel plant where her husband worked. But in reality, she passed away five years after it closed.

And the former steel worker in this ad, I spoke to him on the phone today, and he said that during some of that time, his wife had insurance through her employer. So, Wolf, this is a heart-wrenching story, but it’s not accurate.

KEILAR (voice-over): Joe Soptic (ph) worked at GST steel in Missouri for almost 30 years. He was laid of after Bain Capital acquired the plant, eventually closing it down. Now, Soptic is featured in a new ad by Priorities USA Action, the Super PAC supporting President Obama’s re-election.

JOE SOPTIC, FORMER STEELWORKER & OBAMA SUPPORTER: When Mitt Romney and Bain closed the plant, I lost my healthcare. And my family lost their healthcare. And a short time after that, my wife became ill. And then, I took her up to the Jackson County Hospital and admitted her for pneumonia. That’s when they found the cancer. And by then, it was stage 4. There was nothing they could do for her.

KEILAR: It’s a heartbreaking story, but the ad does not tell all of it. In 1999, Mitt Romney leaves Bain for the Salt Lake Olympics, stopping day-to-day oversight of the company but remaining CEO. In 2001, Joe Soptic (ph) loses his job when Bain closes the plant. His wife still has insurance, though, from her employer, Savers Thrift Store (ph).

A year later, Romney formerly leaves Bain, and it’s that year, 2002 or perhaps 2003, Soptic tells CNN that his wife leaves her job because of an injury. That’s when he became uninsured without fallback insurance from her husband. A few years later, in 2006, she goes to the hospital, is diagnosed with cancer, and dies just days later.

Soptic, an Obama supporter, who has appeared in another ad back in May for the Obama campaign blames Romney for the loss of his job and his insurance.

SOPTIC: That’s the way that I feel. I mean, Mitt Romney, he’s a very rich man. I mean, it’s obvious if you watch him on television that he’s completely out of touch with the average family, or you know, middle income people. I don’t think he has any concept as to how when you close a big company like that how it affects families, the community. You know, it affects everyone.

KEILAR: The Romney campaign is blasting the ad. A spokeswoman saying President Obama’s allies continue to use discredited and dishonest attacks in a contemptible effort to conceal the administration’s deplorable economic record. The Obama campaign and the White House are keeping their distance from the debate. White House press secretary, Jay Carney, said he has yet to see the ad.

JAY CARNEY, WHITE HOUSE PRESS SECRETARY: I’m simply saying that I have not seen this. So, how could I possibly assess it without —

KEILAR: Will you assess it later?

CARNEY: If you ask me tomorrow, sure.

KEILAR (on-camera): Now, Wolf, I followed up with Carney after the briefing, and he told me that he may look at the ad, but if I ask about it, quote, “my assessment will be, I have no assessment.” This is kind of a case of a Super PAC being able to do the dirty work and the campaign and the candidate, and in this case, the White House trying to keep its hands clean, Wolf.

BLITZER: So, the White House at least now not touching this commercial. The Obama campaign, I take it, isn’t saying anything about it either, is that right? What about the Super PAC, itself? What are they saying?

KEILAR: That’s right. Everything is being referred to the Super PAC. I spoke with Bill Burton, a founder of Priorities USA Action. And I pressed him on this, are you drawing this link between Mitt Romney and this woman’s death? And he said, no, we’re not doing that. But Wolf, I think a lot of people who looked at that ad, certainly you, certainly I, did not walk away from it with that impression.