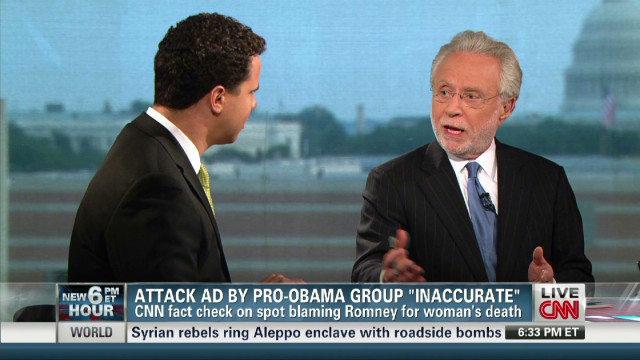 Today on CNN’s The Situation Room with Wolf Blitzer, Bill Burton of Priorities USA Action responded to the recent controversy over a new attack ad linking Romney to the death of the wife of a laid of steelworker. A transcript highlight is after the jump. A full transcript will be posted on http://archives.cnn.com/TRANSCRIPTS/sitroom.html.

Transcript Highlight
THIS IS A RUSH FDCH TRANSCRIPT. THIS COPY MAY NOT BE IN ITS FINAL FORM AND MAY BE UPDATED

You’re responsible for this ad, is that right?

BLITZER:  You stand by it?

BLITZER:  You make a serious allegation, in effect, suggesting that the Republican presidential nominee, in effect, is responsible for the death of this woman.

BLITZER:  We’ve gone through the timeline, and it’s clearly — he’s not responsible for her —

BURTON:  You’re absolutely right.  He’s not.  And that’s not what the ad suggests.

UNIDENTIFIED FEMALE:  Well, what is the message of the ad, because that’s clearly missed then, Bill.

BURTON:  Well, it is clearly missed by that fact check.  There’s no doubt.  The point of this ad is that — you know, it’s to tell the story of one guy, Joe Soptic, and the impact on his life that happened for years, and to this day, as a result of decisions that Mitt Romney made.

This is one of a series of ads in which we talk about the very long-lasting impacts that Mitt Romney’s decision had on these communities, on these individuals and their families.

BLITZER:  Yes, but in 1999, he went to run the Olympic Games in Salt Lake.  And he worked full-time on that.

BURTON:  (Inaudible) when you’re the CEO, you’re responsible for —

BLITZER:  Yes, but most people — in terms of day-to-day operations, he had no role.

BURTON:  He was the CEO, he was the sole shareholder.  He was responsible for the decisions that (inaudible).

BLITZER:  Well, he had been gone from the day-to-day operations.

BURTON:  Well, his name, he signed his name to —

BLITZER:  The bottom line, I want Kate to move on.  But you’re saying —

BURTON:  That is Romney’s

BLITZER:  — you stand by this ad.  You haven’t placed it any place yet, have you?

BURTON:  Well, it will be up in battleground states around the country.  It’s part of a $20 million project that we’re using —

BLITZER:  What part of that $20 million?

BURTON:  Well, you know, it depends.  Every ad is a little bit different.  Sometimes you think that you want to keep an ad on longer and so you —

BLITZER:  So even though so many fact checkers says it is inaccurate, it’s not responsible, it’s misleading, you’re still going to go ahead and play it?

BURTON:  Well, Wolf, just like we just talked about, what we are — what this ad does is it tells a story of one guy and the impact that Mitt Romney had —

BURTON:  Well, this is your opinion.