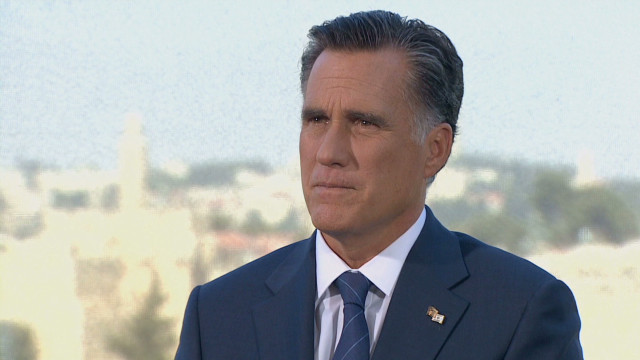 Romney: A nation has the capacity to choose its own capital city, and Jerusalem is Israel’s capital.

Highlights from Full Interview
THIS IS A RUSH FDCH TRANSCRIPT. THIS COPY MAY NOT BE IN ITS FINAL FORM AND MAY BE UPDATED

BLITZER: You’re in Jerusalem right now. You’re a religious individual. Give us a little sense of what this city means to you, the Holy Land, as someone who obviously believes in God. You have a deep commitment to his faith.

ROMNEY: Well, as you know, I’m running for a secular position, not a religious position. But on a personal basis, being in the Holy City is very moving for me. I believe very deeply in the promises that were made in this place. I believe in the mission of Jesus Christ. I believe he walked the very streets that we were walking.

And it’s very moving and emotional for anyone of deep faith to be in a place which is sacred to my faith, sacred to people of the Jewish faith, sacred to Muslims and it’s amazing how many religions count this as a holy place.

Whatever your religion, I think being here draws you closer to the Divine and makes you recognize that we are all children of the same God. And hopefully coming here, people recognize that we should draw together and not fight like little children, but instead act like adults that God created us to be.
—

ROMNEY:  Yes, of course.  A nation has the capacity to choose its own capital city, and Jerusalem is Israel’s capital.

BLITZER:  If you become president of the United States, would you move the U.S. embassy from Tel Aviv to Jerusalem?

ROMNEY:  I think it’s long been the policy of our country to ultimately have our embassy in the nation’s capital, Jerusalem.  The decision to actually make the move is one, if I were president, I would want to take in consultation with the leadership of the government which exists at that time.  So I would follow the same policy we have in the past.  Our embassy would be in the capital.  But that said, the timing of that is something I’d want to work out with the government.

BLITZER:  With the government of Israel?

ROMNEY:  With the government of Israel.

BLITZER:  But every Israeli government has always asked every U.S. government to recognize Jerusalem as the capital and to move the embassy from Tel Aviv to Jerusalem.

ROMNEY:  Well, that would make the decision easy, but I’d still want to have that communication with the government leaders.

BLITZER:  So just to be precise.  If you’re president, you would consult with the Israeli government.  And if they said, please move the embassy, you would do that?

ROMNEY:  I’m not going to make foreign policy for my nation, particularly while I’m on foreign soil.  My understanding is the policy of our nation has been a desire to move our embassy ultimately to the capital.  That’s something which I would agree with.  But I would only want to do so and to select the timing in accordance with the government of Israel.

BLITZER: Would you ask Israel to freeze settlement activity on the West Bank?

ROMNEY: I believe that the issue of settlements is something that should be discussed in private by the American president and our allies. Again, when we show a diplomatic distance between ourselves and our ally, I think we encourage people who oppose that relationship to seek other means to achieve their ends.

I think the best thing we can do is to communicate very clearly to the Palestinians as well as to our friends, the Israelis, that the way to peace is for them to meet and to resolve their differences rather than to look to us to resolve that difference or to look to the United Nations to do it.

So I just don’t think my role, particularly as a candidate, is to — is to begin suggesting what the terms of an agreement might look like.
—

BLITZER: Well, last time you and I spoke in an interview, you told me that Russia was America’s number one geostrategic foe. You still believe that?

The number one national security threat, of course, to our nation, is a nuclear Iran. And time continues to pass. They continue to move towards nuclearization. This is more and more disconcerting and dangerous to the world.

But Russia, particularly look at a place like Syria, Russia has supported the Assad regime, even as it has been attacking its own people. Russia likewise has been slow to move to the kinds of sanctions that have been called for in Iran. Russia is a geopolitical adversary but is not an enemy with a — you know, with (inaudible) missiles being fired at one another and things of that nature.

BLITZER: As someone who organized and ran the Winter Olympic Games and all of us know you did an excellent job at that, should there have been a moment of silence at least the opening ceremonies for these Summer Games in London in memory of those Israeli athletes who were killed in Munich in 1972?

ROMNEY: I expressed my belief, actually, before the Games, that there should have been a moment of silence done at the 40-year anniversary of the brutal massacre of the Israeli athletes in Munich. I think recognizing the sacrifice and the horror and terror, even at the Olympics, is something we should not be lost on the people who weren’t around or may not remember those terrible events.
—

BLITZER: If — on a political question, we are getting ready to wrap this up, all this money being raised, super PAC money, we’re here in Jerusalem. One of your big supporters, Sheldon Adelson, is here. He has said he’s ready to commit $100 million to super PACs to help defeat the President of the United States.

Now all this money, Governor, is this appropriate? What do you think about it?

ROMNEY: Well, I must admit, I think I made very clear in my campaign in 2008 that I felt that the fundraising regulations and rules that exist in our country don’t make a lot of sense. In fact, as you know, a candidate is able to raise a maximum of $2,500 for his or her campaign, a federal candidate. But there could be a super PAC on behalf of that candidate that takes millions of dollars.

This doesn’t make a lot of sense to me, and I think we need to revisit it. I hope at some point we’re able to revisit our campaign finance laws and to have candidates responsible for the advertising on their own campaign as opposed to having advertising and the message of a campaign, oftentimes, being spoken of more loudly by outside groups than by the candidates him or herself.

But what we’ve done is by limiting what a candidate’s campaign can receive at $2,500, we’ve now only opened up a way for people to — that want to make a difference in a campaign to give to some outside group that can’t be coordinated by the candidate.

So the candidate gets the benefit of the money but the disadvantage of not being able to, if you will, control the message and make sure that what these outside groups say is consistent with their beliefs. I think we’ve got it backwards. I’d rather see contributions going to candidates and having candidates take responsibility for what’s said.