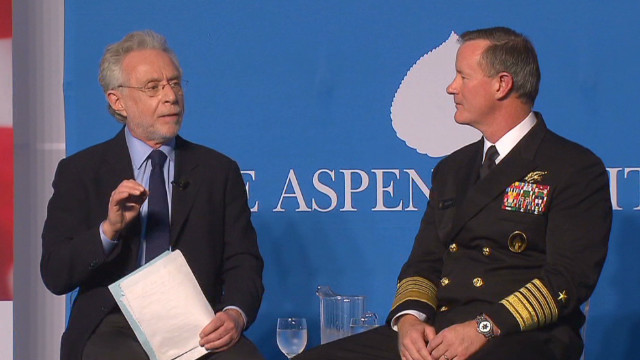 In a rare interview, Admiral William McRaven spoke with CNN lead political anchor Wolf Blitzer at the Aspen Security Forum in Aspen, Colorado. Admiral McRaven spoke with Blitzer about the events leading up to the raid on Osama bin Laden’s compound, if national security leaks are a security risk for America and much more. Parts of this interview aired today on CNN’s The Situation Room with Wolf Blitzer. A highlight of the interview is after the jump and a full transcript of the program will be posted on http://archives.cnn.com/TRANSCRIPTS/sitroom.html.

Please credit all usage of the information to CNN’s Wolf Blitzer
Highlight from the Full Interview
THIS IS A RUSH FDCH TRANSCRIPT. THIS COPY MAY NOT BE IN ITS FINAL FORM AND MAY BE UPDATED

WOLF BLITZER, CNN: This is the guy who’s sitting right here who had the guts to tell the commander in chief we should do it, let’s do it.  And when you ordered that raid and when you said you think you — you didn’t even know for sure that bin Laden was in Abbottabad at that compound about a mile or so away from the West Point of Pakistan, did you?

BLITZER:  But he told the president of the United States that he thought he could do it.

MCRAVEN:  I mean, and this is not a small point.  The fact of the matter is it was the president of the United States that ordered the raid.

BLITZER:  And he deserves an enormous amount of credit for that decision.

MCRAVEN:  Absolutely, he does.

BLITZER:  And when he came to the head of special operations, that would be you, and said, what do you think, what did you say?

MCRAVEN:  Well, first, I will tell you that it was a long process to get there.

And our piece of it, the military piece of kind of what I look at kind of three components was probably the easiest aspect of the entire raid.  The two other pieces of this were the CIA’s role.  And I think when the history is finally written and outlined and exposed on how the CIA determined that bin Laden was there, it will be one of the great intelligence operations in the history of intelligence organizations.

And a tremendous amount of that credit goes to Director Leon Panetta at the time because he built the right team, he had the right people, he made some very gutsy calls.  And he was not concerned about who got the credit.  And so when you take a look at how he built that team, which was a military and intelligence team, tremendous amount of credit goes to the agency.

And the other piece of this really is the president and his national security team.  I have made it very clear to people, again, the military piece of this, we did I think 11 other raids that evening in Afghanistan.  Now, I don’t want to diminish the nature of this raid.  It was a little bit more sporty.

MCRAVEN:  And we understood that there were some strategic implications to it.

But, at the end of the day, it was what we had been doing really for 10 years.  The president and his national security team — I’m not a political guy, but I will tell you, as — as an interested observer in this, they were magnificent in how they handled the start to finish.

We went through a number of meetings.  The president asked all the right questions.  His national security team, with Secretary Gates, Secretary Clinton, Chairman Mullen, the vice chairman, Tom Donilon, Denis McDonough and John Brennan and others, really did a fine job of digging down to find out the facts, to make their recommendations based on the facts.

And of course the president gave me ample time to prepare once the concept was approved.  But at the end of the day, make no mistake about it, it was the president of the United States that shouldered the burden for this operation, that made the hard decisions, that was instrumental in the planning process, because I pitched every plan to him.

So any indication that Bill McRaven ordered this raid, led this raid was, you know, the key piece of this raid is just patently false.

BLITZER:  But you’re a Navy SEAL.

BLITZER:  And these men who went in there, Navy SEALs, they were taking orders from you directly.

BLITZER:  You were speaking to all of them.  You knew each one of them personally.  Here’s just a technical question.  Did you rehearse it in advance?

MCRAVEN:  Well, I’m not going to talk about the tactical details.

But, obviously, we’re not going to do a mission like that without rehearsing.  We rehearse every operation, particularly significant ones like that.  As I said, I have made a point of not talking about the tactical piece of this, other than to say that it is what we do.

BLITZER:  Well, that stealth helicopter, when it went down — and all of us have read about it, we have heard about it, I have spoken to people who were in that room, the White House SITUATION ROOM, which as opposed to another SITUATION ROOM — but when that helicopter went down, there was a gasp, because a lot of the folks there, correct me if I’m wrong, thought of Desert One in 1980, Jimmy Carter’s plan to rescue Americans in Iran.

MCRAVEN:  Well, I wouldn’t pretend to tell you what they were thinking.

BLITZER:  What were you thinking?

MCRAVEN:  I was too busy, frankly.  I mean, we had a backup plan.  We executed the backup plan.

And at that point in time, you’re worried about getting the mission done and getting the boys back home.  So we had a plan, suffice to say.

BLITZER:  And it worked.

MCRAVEN:  And it worked.

BLITZER:  That helicopter, by the way, all the stealth technology and all that, is that gone?  Has it been shared with bad guys?

MCRAVEN:  I’m not going to address that.

BLITZER:  You don’t want to talk about it.

All right, let’s talk a little bit about — and I want to nail this down as best as I can.  You didn’t have 100 percent knowledge.  The president didn’t have 100 percent knowledge that bin Laden was holed up in that compound.  Did you have 80 percent, 50 percent?  Give me a ballpark.  How confident were you that a tall guy was hiding out in that compound?

MCRAVEN:  Well, again, I’m not going to address the tactical piece of that.

Suffice to say we were not sure he was there.  And, again, that gets back to some tough decisions that were made.  My job was to get him if he was there.  If he wasn’t there, we would know that pretty quickly.  And our intent was to get up and get out.