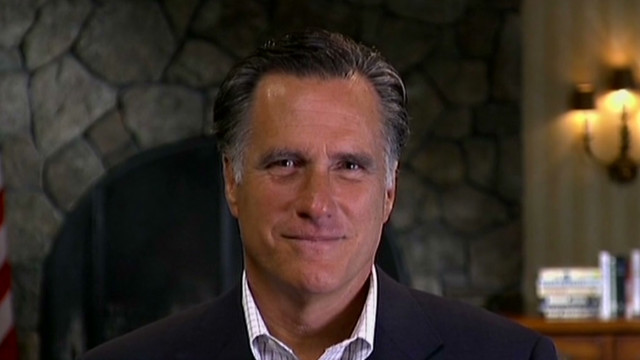 Gov. Romney to CNN’s Jim Acosta: “There’s nothing wrong with being associated with Bain Capital”

Today CNN national political correspondent Jim Acosta spoke with GOP presidential candidate Mitt Romney about his time at Bain Capital and the speculation surrounding the selection of his running mate. Acosta’s interview with Romney airs in the 6 p.m. ET hour of CNN’s The Situation Room with Wolf Blitzer.

Highlighted excerpts from the interview are after the jump and a full transcript of the interview may be found here. Please credit all usage to CNN national political correspondent Jim Acosta.

ROMNEY:  Well, there’s nothing wrong with being associated with Bain Capital, of course.  But the truth is that I left any role at Bain Capital in February of ’99.  And — and that’s known and that’s said by the people at the firm.  It’s said by the documents — offering documents that the firm made subsequently about people investing in the firm.  And I think anybody who knows that I was out full-time running the Olympics would understand that’s where I was.  I spent three years running the Olympic Games.  And after that was over, we — we worked out our retirement program, our departure — official program for Bain Capital and handed over the shares I had.

ACOSTA:  Ms. Cutter suggested you might be guilty of a felony, Governor Romney.

What is your response to that?

ROMNEY:  Is that really what’s expected from the campaign of the sitting president of the United States, of the Republican nominee of his party?

I mean is this — is this the level that the Obama campaign is willing to stoop to?

Is this — is this up to the standards expected of the presidency of the United States?

Let’s talk about what it takes to get America working again and to help the American people in very difficult times, as opposed to have a campaign doing exactly what they said from the beginning.

ACOSTA:  They’ve called on you to release more of your tax returns.  You’ve released your 2010 tax return and a 2011 estimate.

Bill Clinton was on the “Today” show today saying that you should release more.

As you know, during the Republican primaries, Newt Gingrich, Rick Santorum and Rick Perry all called for you to release your taxes.  Those are leader from both parties saying that you should release more of your taxes.

When are you going to release more of your taxes and how many years?

ROMNEY:  I’ve indicated that — well, first of all, we’ve complied with the law.  The law requires us to put out a full di — financial disclosure.  That I’ve done.

I know there will always be calls for more.  People always want to get more.  And, you know, we’re putting out what is required plus more that is not required.  And those are the two years that people are going to have.  And that’s — that’s all that’s necessary for people to understand something about my finances.

And, look, if people believe this should be a campaign about attacking one another on a personal basis and go back to the kinds of attacks that were suggested in some campaigns in the past, I don’t want to go there.

I — I want this to be a campaign about the direction for America and about who can get America working again and who can rein in the excessive deficits that you’re seeing in Washington.

The president, apparently, is not ready for an honest and important debate about the future of America.