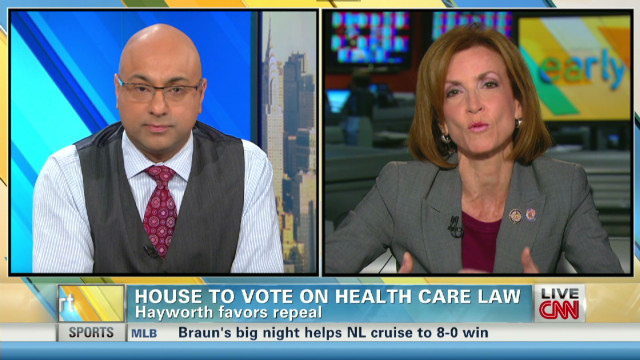 On Early Start this morning, Rep. Nan Hayworth (R-NY) talks to CNN’s Ali Velshi about the House vote to repeal the Affordable Care Act, American opposition to the law and the costs associated by the landmark health care legislation that was recently ruled constitutional by the Supreme Court.

Rep. Hayworth says, “The 2010 health care law is going to run into thousands and thousands of pieces of regulation, pages of regulation, not all of which have been promulgated. It’s a net 2 trillion plus dead weight cost on the American economy.”

She later added, “They are great goals, I endorse the goals as a physician and as a Republican. But the problem is, there are better and more cost effective and consumer responsive ways to do it. This is a terrible way.”

Early Start airs weekday mornings from 5-7am ET on CNN.