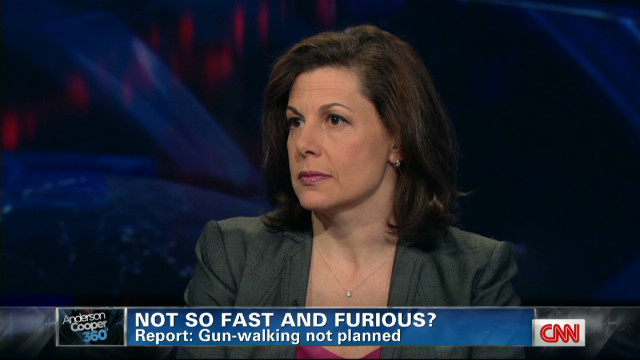 Eban says, “After six months of investigation, what became clear to me is that the things that Congress was holding up as centerpieces of proof that guns had been walked were, in fact, misconstrued, incorrect, resulted from other motives, other reasons, that there were alternate explanations and that really, this was a case of cherry picking, you know, small phrases, sentences, without any of the context really that you need in order to understand what actually happened in Phoenix Group Seven.”

When guest anchor Soledad O’Brien asks why the Department of Justice hasn’t denied the gun walking allegations, Eban answers, “I don’t know exactly why. One sense is that, you know, when this scandal first broke and Congress made these allegations, the Justice Department went to all their political folks to ask what happened. They never went to Dave Voth, the group supervisor and said sit us down and tell us exactly what happen. In fact he was never even questioned in any detail by ATF and to this day has not been. So there’s a sense that the Justice Department immediately wanted to deal with the potential political repercussions without necessarily grappling with the substantive question of what actually happened. Now I think they would say that they have turned to the inspector general to do a thorough investigation and they are withholding judgment pending the — that review. But, in fact, I think anyone watching Eric Holder testifying would conclude that he believes that guns were walked.”