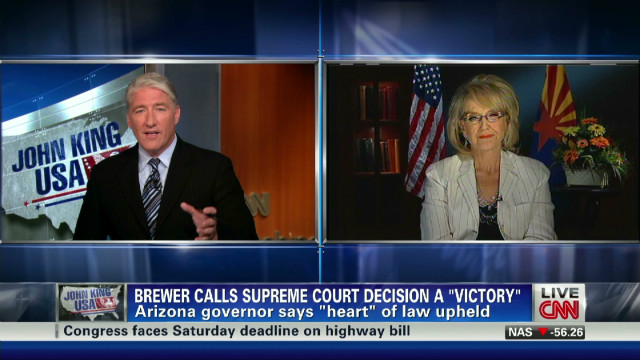 Gov. Brewer: Three hours after the decision, they arbitrarily single out Arizona and sent a bomb

CNN’s John King spoke with Arizona Gov. Jan Brewer (R) today about the Supreme Court’s ruling on the Arizona immigration law. Gov. Brewer told King, “let me begin by saying that it was a victory today.” A full transcript and a video highlight of the interview are after the jump. Please visit CNN.com /ThisJustIn for today’s live blog and reports on the immigration decision.

Please credit all usage of the interview to CNN’s John King, USA

KING:  You’re declaring victory because that one enforcement provision was left in place.  But three other contested parts were left out and the court essentially said, Governor, that there are lines and that in those three cases, the court said, you were crossing the line into what is the federal government’s purview.

Do you accept that decision from the court now even though I suspect you disagree with it?

BREWER:  We have always worked with the federal government in enforcing federal law.  But the heart of the law the court upheld.  And then the federal government, the president and Homeland Security, three hours after a unanimous vote, they selected to make Arizona a target and rescinded 287.  You know, the people of America ought to be alarmed.

KING:  Can you appeal that, Governor?  Or are you essentially on your own now?

BREWER:  Well, I guess what he’s telling us is that Arizona, you’re on your own.  Take it or leave it.  You know?  I guess he doesn’t think we’re part of the country anymore.

—
KING:  Forgive me for interrupting, Governor.  I want to explain what 287G is.  That is an agreement.  Washington re-enters into agreements with state and local police departments and essentially says you can help us enforce federal immigration laws.

And the Justice Department today, after this decision, rescinded that agreement with your state.  Again, their position, Governor, would be that they don’t trust your state, that they see this law as somehow nefarious and that they believe they have to uphold the civil rights because they don’t think you will.  How can you assure them that’s not the case?

BREWER:  Well, the bottom line is, is they took an oath.  The president took an oath to uphold the laws of the United States of America and unanimously the Supreme Court ruled that Senate Bill 1070, the portion that deals with I.D., was upheld.

And immediately, three hours after the decision was made, then they arbitrarily single out Arizona and sent a bomb, if you will, across our bow and made Arizona once again a target.  The people of America ought to be outraged.  This is absolutely an assault.