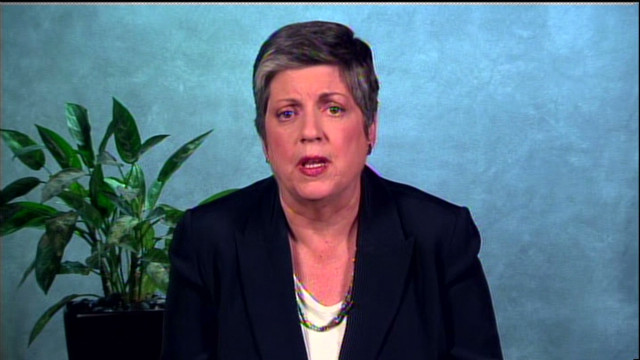 Today CNN’s Wolf Blitzer spoke with U.S. Secretary of Homeland Security Janet Napolitano about President Obama’s announcement on immigration. This interview will air today during the 4 p.m. ET hour of CNN’s The Situation Room with Wolf Blitzer.  A highlight from the interview is after the jump.

Highlight from the Interview

WOLF BLITZER, CNN HOST: And joining us now, the secretary of homeland security Janet Napolitano. Madam Secretary, thanks for coming in on this busy day. You caught all of us by surprise, especially as we went back and looked at what the president has said. Back in October 2010, he said “I am president, I am not king. I can’t do these things just by myself. We have a system of government that requires the Congress to work with the executive branch to make it happen. I’m committed to making it happen, but I’ve got to have some partners to do it.” He was referring to comprehensive immigration reform.

But now he and you are taking unilateral, executive action to begin this process. Why now?

JANET NAPOLITANO, SECRETARY OF HOMELAND SECURITY: Well, this is a logical progression from a series of decisions that we’ve made over the last several years. To focus immigration enforcement on those who have violated criminal law in addition to the immigration law. Those who are repeat violators. Those who are recent border crossers.

We’ve also been putting unprecedented resources at the border so that illegal immigration attempts at the Southwest border haven’t been this low since before 1971. But even as we’ve been enforcing the law – and we have removed a record number of individuals from the country, there’s this group, this group of young people brought here through no fault of their own. They often haven’t been to their country of origin, they don’t speak the language, they’re in school or they’re in the military, they’ve not been in trouble with the law. We need to, within our discretionary authority, defer action against these individuals. And that’s what I’m announcing today.

BLIZTER: Lindsey Graham, the Republican senator from South Carolina, says the president’s decision – what the president is doing is choosing politics over leadership because all of the critics are now insisting this reeks of politics. You want to respond to that?

NAPOLITANO: Well, I would say no. First of all, this was a decision out of my office as the secretary of Homeland Security. And it was a decision made after we looked at what we’ve been doing over the last three year. And as you know, one of the things we’ve been doing over the last year is reexamining all 340,000 pending immigration cases and trying to restack them and lie with our priorities in trying to administratively close cases that are low priority.

But as we’ve done that, we’ve now – we’ve seen this whole category of young people. And we need to go a step further, and this is the next logical step. And that is to actually defer action.

BLITZER: You’re talking about what 800,000 potential people who would qualify for this new status?

NAPOLITANO: It’s – it’s really difficult to say. There are those who are in removal proceedings now, and we will either find them or we’re asking them to help us self-identify. There will be hot lines and Web sites up over the next couple of days.

BLIZTER: What about the parents of these children?  Children come forward now, they identify themselves. Should the parents be concerned that potentially they could be deported? They would now be identified as illegal immigrants.

BLITZER: What social services would these young people be qualified for? Would they be qualified to receive Medicaid benefits, food stamps, school vouchers, stuff like that?

NAPOLITANO:  No.  No, they won’t be – – again, there’s deferred action now given in certain cases and they don’t qualify for those type of benefits.  The one thing they may qualify for is a work authorization card if they can demonstrate economic necessity.

BLITZER:  Is this a pathway to citizenship for these young people?

NAPOLITANO:  Not at all.  In fact, that’s where Congress needs to act.  We continue to urge the Congress to pass the DREAM Act, look at comprehensive immigration reform, the immigration system as a whole.  I mean, I’ve been dealing with immigration enforcement for 20 years and the plain fact of the matter is that the law that we’re working under doesn’t match the economic needs of the country today and the law enforcement needs of the country today.  But as someone who is charged with enforcing the immigration system, we’re setting good, strong, sensible priorities and again, these young people really are not the individuals that the immigration removal process was designed to focus upon.

BLITZER:  One quick final question.  Did the Department of Homeland Security, ICE – – Immigration and Customs Enforcement – – are you ready for what is about to happen?  Because presumably you’re going to be swamped with phone calls, appearances, these young people want to get some legal status.

NAPOLITANO:  Yeah.  We’re cautioning people.  We need to take it incrementally.  Instructions have gone out to ICE and CDP today that they are not to put these young people into removal proceedings.  We will begin the process over the next weeks of identifying those already in removal or who have received a final order of removal to consider them for deferred action and there will be phone numbers and a public advocate that these individuals can actually call beginning next week if they think they qualify.  And then for those who haven’t been in the immigration system yet, they haven’t been put into any kind of a proceeding but they want to come forward, that will have to be to a CIS office and that will be within 60 days.  Again, we are posting on DHS.gov initial information, initial frequently asked questions, but we are going to have to work together with the community, with the country to do as smooth an implementation as possible.

BLITZER:  Janet Napolitano.  Thanks so much, the secretary of homeland security.  Good luck.