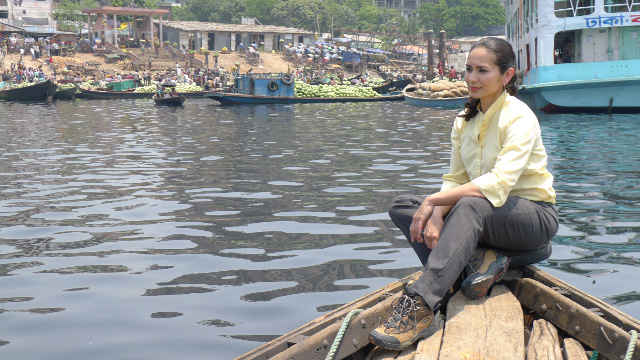 The streets of Dhaka, Bangladesh

This month, ‘Future Cities’ is in Dhaka, Bangladesh. This sprawling Asian metropolis is the fastest growing megacity in the world, with 15 million residents and counting. Thirty per cent of people live in slums, which is increasing every year with the arrival of a whopping 500,000 new migrants, all looking for work and relief from the floods of the north.

This city may be choked with people, traffic and pollution, but, like any city, Dhakahas its dreams and its vision for the future. With the pressure on to provide efficient transport networks, adequate housing, and clean water, plans are underway to tame this megacity and make it liveable. This month ‘Future Cities’ is hosted by Leone Lakhani who learns about the city’s bold plan to improve the whole transport infrastructure, including a new metro system which will carry 750,000 people each day; a new industrial plant to treat water and quench the thirst of the city’s inhabitants; plus she also meets an architect who’s planning for Dhaka’s future by building floating houses, schools and hospitals.

Will this city will ever cope with the demands of a population that is spiralling out of control? Profiling some of the most influential women from across the globe, each month ‘Leading Women’ meets remarkable professionals from a variety of fields, including business, the arts, sport and culture.

In this edition of the series, Jennifer Li, Chief Financial Officer at Chinese search giant Baidu is profiled. Prior to joining Baidu in 2008, Ms. Li served as controller of General Motors Acceptance Corporation’s North American Operations from 2005 to 2008, and has been recognized by the Wall Street Journal, the Financial Times, and Forbes variously as one of the “Top 50 Women in the World to Watch. “

Also in this month’s programme, one of the most successful female sportscar racers in history, Milka Duno. In addition to holding the record of highest finish for a female driver in the 24 Hours of Daytona race, Duno is also a qualified Naval Engineer with four master’s degrees – in Organisational Development, Naval Architecture, Fishing and Aquaculture and Maritime Business. Already a successful element of CNN’s ‘World Sport’ programming, ‘Winning Post’ in June embarks on an exciting development as CNN’s global audience will be able to enjoy all the coverage of a major Group 1 meeting in a special monthly show.

Few sports can match the elegance and history of horse racing. Where ancient tradition meets cutting-edge technology, CNN takes viewers inside the track; getting the stories from the top trainers, jockeys and owners in the business, as well as a behind-the-scenes look at the fashions and the fortunes that go hand-in-hand with the most glamorous sport on the planet.

Presented by racing insider Francesca Cumani, the first ‘Winning Post’ invites CNN viewers to two of the most glamorous events in racing: the Prix de Diane and Royal Ascot. The Prix de Diane is France’s most stylist race meeting, held annually at the picturesque Chantilly Racecourse. Expect the fashions off the field to be as impressive as the fillies on it. Also known as the ‘French Oaks’, the Prix de Diane is the nation’s premier race for 3-year-old fillies and is counted among France’s “Classic” races.

Royal Ascot is arguably the world’s most recognisable race meeting: think enormous hats and ‘My Fair Lady’. But it also brings together some of the best racing in the world, all taking place under the watchful eye of HM Queen Elizabeth II, who will arrive every day by carriage from Windsor Castle. This year the two best horses in the world, Frankel and Black Caviar, will be among those racing in the five-day meeting. Left to right: Navratilova & Kvitova at The All England Club

With the grass court season in full swing, June’s ‘Open Court’ comes from London, as some of the best players in the world gear up for the third slam of the year at the Wimbledon Championships at the All England Club. Leading the show are some of the biggest names in tennis: nine time Wimbledon champion Martina Navratilova interviews reigning champion Petra Kvitova at the club. CNN was the only network there for this meeting of champions past and present – as Navratilova and Kvitova walked toward Centre Court, touched the grass and toured the museum – both for the very first time. Both players have a lot in common – they are left handed and both grew up in the Czech Republic. Navratilova was there to watch Kvitova stun the world with her Wimbledon win in 2011, and Kvitova was inspired by Martina growing up. This is not an encounter to be missed! This month, ‘Living Golf’ goes behind the scenes in the build-up to this year’s Ryder Cup, due to commence in  Illinois this September. Host Shane O’Donoghue interviews one of the biggest names in the sport, European Ryder Cup captain, Jose Maria Olazabal, for his opinion on the tournament.

Also in the show, O’Donoghue is joined by Major Champion and former World number 1, Martin Kaymer, for this edition’s ‘Hotshots’ series, in which Kaymer demonstrates how to hit the driver more reliably, with playback in super slow-mo. This month, ‘Inside the Middle East’ explores the stories of women throughout the region, highlighting Jordan in particular as a country whose constitution doesn’t codify equal gender rights.

Host Rima Maktabi heads north of Amman, to a small village along Jordan’s border with Syria, to explore the Hashemite Kingdom’s notorious ‘honour killings’. In the past decade, over 100 Jordanian women have been murdered by their own families. Their crimes? Bringing shame and dishonour on the community, typically for mingling with young men or committing adultery. The programme meets with one woman who fled nine years ago to a shelter, far from her family, to escape threats of death.

Maktabi also visits the United Arab Emirates Ewa’a Shelter for Women and Children, where victims are given medical and psychological care. She meets Sara Suhail, an Emirati social worker who has devoted her life to helping victims of sexual violence.

The programme also returns to Saudi Arabia to chart the progress of Jeddah United, an all-female basketball team that the programme first met in 2008, as they struggled in a conservative society where women are not allowed to play sports in public.