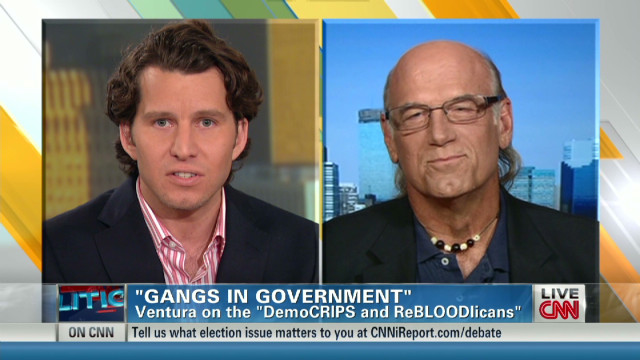 Former Governor Jesse Ventura, author of “DemoCRIPS and ReBLOODlicans: No More Gangs in Government,” explains his gang metaphor for the party system and suggests ways to improve the political process on Starting Point.

Ventura says, “You have to bribe the parties, bribe the candidates. If we do that in the private sector, we go to jail. Yet, we have a complete political system based upon bribery. And now, with the Supreme Court’s ruling, corporations can give any amount of money to any candidate, and they don’t even have to say who they got the money from. Let me give you what should happen. I think all presidential candidates should be forced to wear NASCAR racing suits…. That way you’ll know who owns the candidate.”

He continues, “The one simple reform would be on every ballot, don’t list the gang names or the gang symbols. They make it far too easy. If you’re conservative, you don’t have to know the candidate’s name. You walk in and look for Republican. If you’re a liberal, you don’t need to know the candidate’s name. You look for Democrat. How about removing all of that and just print the candidates’ names? Then, it becomes to the voter. The voter must then educate themselves. What does John Smith stand for? Make the parties like political action committees. They can still endorse the same as the teachers union, the police union, fire, whoever. They can endorse candidates. But let’s remove the party names from the ballots.”

Starting Point with Soledad O’Brien airs weekdays from 7-9am ET on CNN.