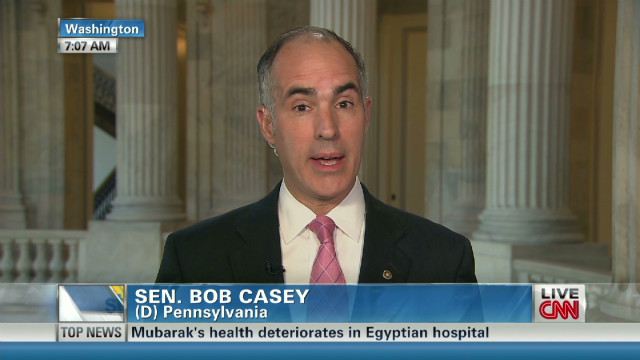 On John McCain’s charge that the White House leaked information, Sen. Casey says, “Well, that’s a very serious charge that’s been made against the administration. I think that the proposal that Senator Carl Levin has made, Chairman of the Armed Services Committee, to have a hearing in closed fashion makes the most sense. Anytime you make a charge like that, it’s very serious, but I think we’ve got to make sure that we’re resolving this in the right way.”

He continues, “We don’t know the extent of this yet, but it should be closely examined. It shouldn’t be a part of the usual political football in Washington. It should be examined in a way that’s substantive, that’s thorough and that’s balanced so that we arrive at the truth.”

On the recall election, Casey says, “What I hope people don’t conclude is somehow that if you take away collective bargaining rights that that’s somehow good for workers and for the economy. That’s one of the last things we need right now is to undermine workers at a time when the economy’s still in tough shape for a lot of working families.”