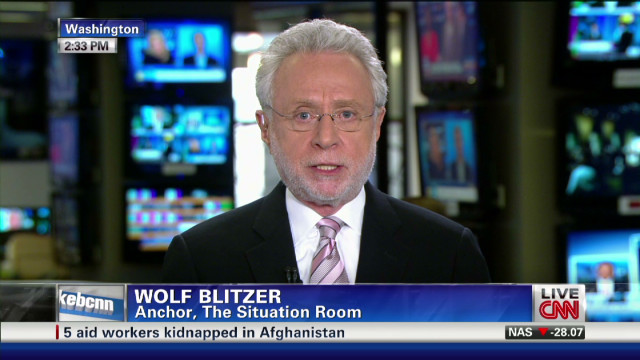 Colin Powell on gay marriage: “I have no problem with it.”

CNN lead political anchor Wolf Blitzer sat down with former Secretary of State Colin Powell to discuss his new book and a variety of foreign policy issues. A highlight is after the jump. Blitzer’s full interview with Gen. Powell will air during the 5 p.m. ET hour of The Situation Room with Wolf Blitzer on CNN.

Highlights from the Interview
THIS IS A RUSH FDCH TRANSCRIPT. THIS COPY MAY NOT BE IN ITS FINAL FORM AND MAY BE UPDATED

BLITZER:  I remember, you were chairman of the joint chiefs when you installed the “Don’t Ask, Don’t Tell” policy in the U.S. Military that prevented gays from serving openly.  I know you changed your attitudes over these years.  But what about gay marriage?  Are you with the president in supporting gay marriage?

POWELL:  I have no problem with it.  And it was the congress that imposed “Don’t Ask, Don’t Tell.”  It was certainly my position, and my recommendation, to get out us of an even worse outcome that could have occurred, if you’ll recall.  But, as I’ve thought about gay marriage, I know a lot of friends who are individually gay but are in partnerships with loved ones.  And they are stable a family as my family is.  And they raise children.  And so I don’t see any reason not to say that they should be able to get married under the laws of their state or the laws of the country, however that turns out – it seems to be the laws of the state.

There may be religious objections to it, and I respect that many denominations have different points of view with respect to gay marriage.  And they can hold that in the sanctity of their place of religion and not bless them or solemnize them.  But, in terms of the legal matter of creating a contract between two people that’s called marriage, and allowing them to live together with protection of law, it seems to me is the way we should be moving in this country.

And so I support the president’s decision, and I think most Americans increasingly understand that times have changed, just like they changed between gays in the military and when I was able to support removing that barrier to service.  And so I hope everybody will just carefully look at this, and I understand the religious objections to it.  But at the same time, we are a country that is open to diversity and change.  And my experience with many of my gay and lesbian friends is that they form unions as strong as any other unions I’ve seen and raise children that are good, strong children.  And are either or heterosexual or homosexual, lesbian, depending on themselves, not because their parents happen to be.

BLITZER:  Do you have a problem with welcoming Mullah Muhammad Omar back into potentially a government in Afghanistan?  He’s still on the loose.

POWELL:  I must say, candidly, that I’m disappointed in the president’s remarks.  Look at all the trouble Mullah Omar has created over the past 10 years.  Look at all the lives that have been lost as a result of his actions and the people who are working for him.  And so, I think it’s a little hard to say we would welcome him back in as an Afghan.  I think he has to be brought to account for all the tragedies that have taken place over the past 10 years. But, ultimately, that’s a matter that the Afghan people will have to deal with.  I don’t think they want to see the day of the Taliban to return, and certainly not with Mullah Omar in charge.

BLITZER:  And the U.S. is going to be there at least through the end of 2014, another two and a half years.  And I’ll ask this question because I know, among other things, you’re a Vietnam war veteran.  What do you tell the family members of the troops who will be killed between now and the end of 2014 about why they were there?

POWELL:  I think we tell them that we are so proud of your servicemen and servicewomen.  They’re volunteers, they understood the dangers associated with their volunteering.  We’re going to do everything we can to support them and make sure they come home safely.  But war is a dangerous thing and there are people who are trying to get at them.  And if you lose your loved ones, we will mourn and we will do everything we can to make sure that loss was not in vain.  But at the end of the day, if that country stabilizes itself, rids itself of corruption, and can become a functioning society that is at peace with others in the region, then I think you can say to the parents “your loss was not in vain.”