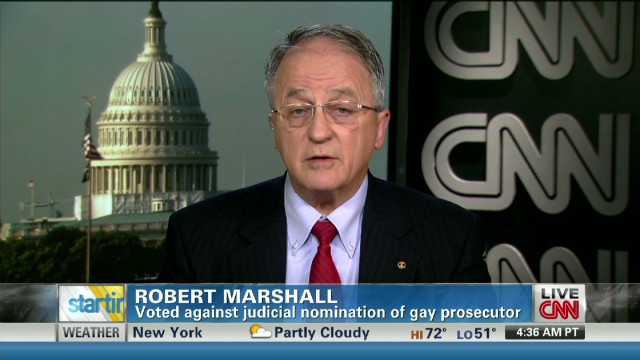 Virginia delegate on blocked judicial nomination of gay prosecutor: Sodomy is not a civil right

Robert Marshall, a Republican delegate in Virginia, explains why he voted against the judicial nomination of gay prosecutor, Tracy Thorne-Begland.

Marshall says, “Dr. Martin Luther King and Rosa Parks never took an oath of office that they broke. Sodomy is not a civil right. It’s not the same as the Civil Rights movement…. In late 2011, [Thorne-Begland] was critical of the Don’t Ask Don’t Tell, he criticized our Attorney General simply for explaining what the law of Virginia is with respect to certain protected classes. So he’s gone beyond that. He can be a prosecutor if he wants to, but we don’t want advocates as judges.”