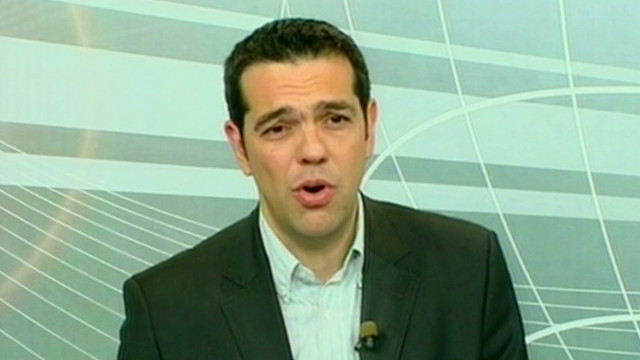 Tsipras to Amanpour: “We don’t want Greece outside the euro…”

Leading Greek political party chair Alexis Tsipras  joined CNN International’s Christiane Amanpour for the Wednesday, May 16 edition of Amanpour.   Tsipras spoke of Greece’s commitment to the euro zone and rejected Germany’s demands for Greece to continue its austerity measures as putting the eurozone “in a big danger.”  This is an excerpt from that interview :

CHRISTIANE AMANPOUR, HOST OF “AMANPOUR”:  Mr. Tsipras, thank you for joining me from Athens.  Mrs. Merkel has said you either do the reform and the austerity or you are out of the euro. Do you think that the German chancellor is bluffing?

Amanpour airs weekdays on CNN International at 3:00pm with a replay at 5:00pm Eastern in the U.S.  and at 21:00 CET, with a replay at 23:00 CET.  The full transcript for this program will be posted here later today.