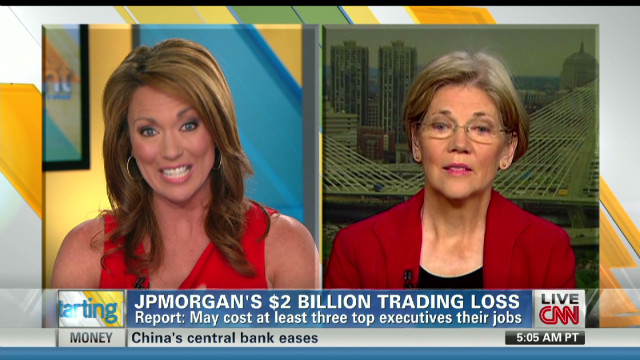 Elizabeth Warren on Jamie Dimon: NY Fed. role poses conflict of interest; ‘this is about accountability’

Senate candidate Elizabeth Warren (D-MA) appears on Starting Point to discuss why she thinks JPMorgan CEO Jamie Dimon should step down from the Federal Reserve Bank of New York.

Warren says, “Banks have been loading up on risk and they don’t want to be accountable. Jamie Dimon not only is CEO of JP Morgan Chase, he holds this position of public trust, advising the New York Fed. on how to regulate risk for these large financial institutions, like his own finanicial institution.”

She continues, “It’s not just conflict of interest, it’s a real point about attitude here. This isn’t personal to Jamie Dimon. It’s what’s been going on ever since Dodd-Frank passed. There’s been a guerrilla war out there in which the largest financial institutions have been doing everything they can to make sure that financial regulations don’t get put in place. And if they do get put in place, that they’re loaded with loopholes and not very effective. There’s been a lobbying army hired by these financial institutions becasue they really don’t want to have any oversight.”