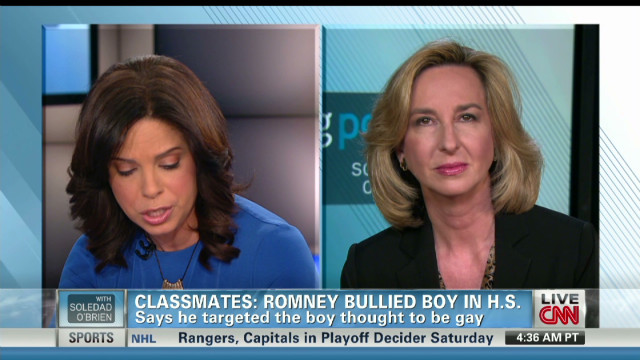 Rep: Mitt Romney is not a bully

Kerry Healey, Romney campaign adviser, explains why she thinks we should take Mitt “at his word” about alleged bullying in high school.

Healey says, “Is Mitt Romney a bully? And the answer is, no…. He does not have a vicious bone in his body.”

When CNN’s Soledad O’Brien asks if Mitt Romney owes a bigger apology, Healey responds, “He’s gone beyond that already. I think he said that he has done a lot of dumb things. He’s done some stupid things in high school. I believe we all have. I think that anyone watching this today would feel a little bit uncomfortable about having their high school years completely dissected and taken apart in this manner. It was 48 years ago, so the question of how much one remembers I think is very valid. So the main question for the American people is, is this a character trait that they should have any concern about? I’ve known Governor Romney for the last 10 years and I can tell you that he is unfailingly kind. He’s deeply concerned about what goes on in other people’s lives. He’s been terribly moved by the stories that he’s hearing out on the trail about the economic impact of the downturn across America, the unemployment. And so I have to say that what people really want to hear about is, does he care, and I can tell you that he cares deeply. It’s a deeply compassionate person and that bully is not something that he has ever knowingly engaged in.”