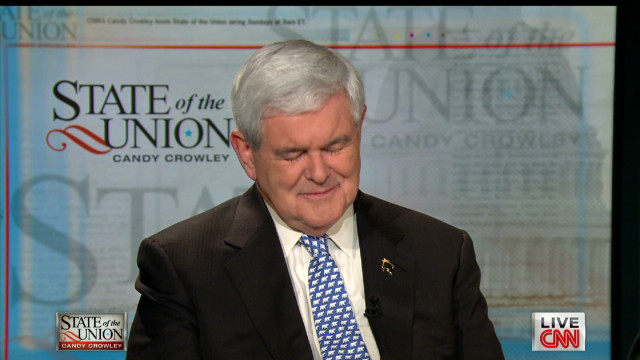 Newt Gingrich: Romney “has earned the right to represent the Republican Party”

Today on CNN’s State of the Union with Candy Crowley, former House Speaker Newt Gingrich spoke about ending his bid for the presidential nomination, Mitt Romney’s credentials and whether he would entertain an offer to be Romney’s running mate. He also discussed the tea party movement and the senate race in Indiana. Highlighted excerpts are after the jump and a full transcript may be found here.

GINGRICH: But that’s the first thing you want to say to people is, look, this is not some magic show. You’re either going to get Barack Obama or you’re going to get Mitt Romney. Now, I don’t see how any conservative given that choice could end up favoring Barack Obama, and that’s what it’s going to come down to.

Mitt Romney has many strong things. First of all, he won. You know, I didn’t win. Rick Perry didn’t win. Michele Bachmann didn’t win. Rick Santorum didn’t win. You have to have some respect for a guy who spent six years of his life, put together a serious national campaign, made the case. In the two debates that were decisive, frankly, he beat me. I beat him in a lot of other debates but when it got to the crunch and he had to do it or die, he did it. And so I have great respect for him.

I think that the — and I’m not quite sure what the magic words as you all in the media want out of me so let me say this. I believe that Mitt Romney will be a dramatically better president for the United States than Barack Obama. I believe that he has earned the right to represent the Republican Party and he’s earned it the hard way. He has fought his way to the nomination. Nobody gave him an inch.

On whether Gingrich will campaign with Romney

CROWLEY: Do you have a date set to campaign with him?

GINGRICH: We’re talking about several dates and several major events we’re going to do together. I have said to the campaign I will be available at their convenience to do anything they want me to do because they’re in charge. This is their campaign. They’ve got to win it. And I have got to be there as an associate, but I’m not the leader. Mitt Romney is the leader.

CROWLEY: Would you be number two?

GINGRICH: Oh, I can’t imagine it. You’ve known me for years. Would you pick me to be number two?

CROWLEY: That’s a wholly different story. Let’s deal with the reality of it, would you be Mitt Romney’s number two?

GINGRICH: I think Romney is going to look for somebody who is younger. I think he’s got somebody like Kelly Ayotte in New Hampshire, Rob Portman, Marco Rubio. You look at a Susana Martinez, Bobby Jindal, or you look at somebody like Mitch Daniel. We have a really — we have a big, deep bench now.

On the Indiana senate race

GINGRICH: Well, I’ve known both of them for a long time. Mourdock is a very aggressive conservative. He has been campaigning very, very hard. And he does represent the kind of Tea Party change oriented momentum. And my hunch is that Mourdock is probably going to win. But I think it’s one of those places where people want more change and they’re not comfortable — and they have a governor who has brought tremendous changes. So they have a real model of change in Mitch Daniels.

On the tea party movement

GINGRICH: I think the effort to attack the Tea Party has had an impact. My experience at the Tea Parties has been overwhelmingly, they’re serious. They study the constitution, the Declaration of Independence.

I mean, I find them to be very serious citizens everywhere I go in the country. And I think the Tea Parties have added a lot, and I think you will see in certain races that they are still very, very important.

CROWLEY: They seem to have faded a bit, though, would you agree with that?

GINGRICH: But they don’t have passion they had in 2010 partially I think out of frustration with having won the House and not seeing the scale of change they want. I mean, this is a very complex form of government and there are times when it takes longer to get something done than people would like.