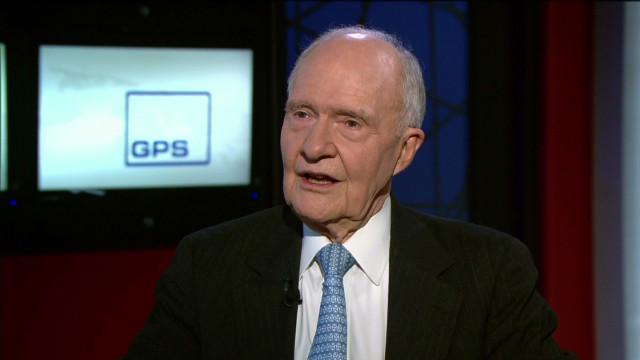 Brent Scowcroft: “Many parts of the party call me a ‘RINO’ – I don’t think I’ve changed my views at all”

The Sunday, April 29th edition of FAREED ZAKARIA GPS included an interview with former National Security Adviser Brent Scowcroft (Gerald Ford and George H.W. Bush Administrations), about current national security challenges and the state of the Republican party.  On the latter, Scowcroft answered his critics who say he is no longer a Republican and says he feels there is room for people who share his views inside the party – and that the party has been through evolutions before but history suggests it will evolve to a moderate place.  The exchange from this portion of the interview is below:

FAREED ZAKARIA: Are you comfortable with the Republican Party these days?

BRENT SCOWCROFT: Well, many parts of the party call me a RINO.ZAKARIA: Republican in name only.

SCOWCROFT: Republican in name only — I don’t think I’ve changed my views at all.

ZAKARIA: You think the party has —

SCOWCROFT: — that I think the party has moved.

ZAKARIA: Do you think — are there any prospects for changing? It feels as though it’s moved a lot since you were in office.

SCOWCROFT: Well, I think it has. Yes, I think there are prospects for change because the attitudes go up and down. You know, I still remember — you wouldn’t — 1964 and Barry Goldwater, who ran a very conservative campaign, and when he was badly defeated, the Republican Party turned to Nelson Rockefeller and Ronald Reagan and other moderates.  So, you know, the — we’re continually reinventing ourselves.

FAREED ZAKARIA GPS airs Sundays on CNN/U.S. at 10:00am and 1:00pm ET, and at 8:00am and 3:00pm ET on CNN International.  The full transcript of this edition of the program may be found here.