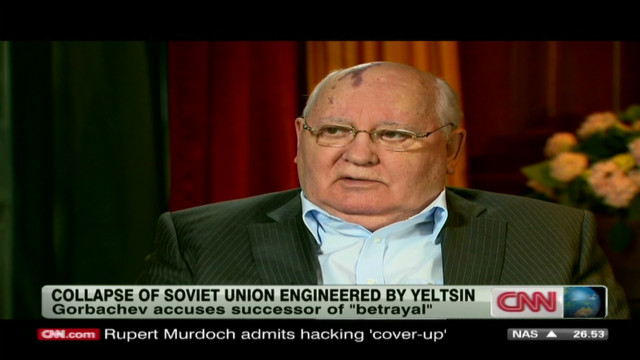 Gorbachev to Amanpour: Cheney and Gates liked “Yeltsin’s plans to destroy the union…”

Amanpour host Christiane Amanpour interviewed former Soviet President Mikhail Gorbachev for Thursday, April 26th in an interview focused on Russia’s uneven transition towards democracy.  Gorbachev says that officials from the George H.W. Bush Administration influenced his early succession by Boris Yeltsin, who presided over a rapid dissolution of the former Soviet Union.  This is that exchange:

AMANPOUR: …about seven years ago, President Putin said, quote, “The collapse of the Soviet Union was the biggest geopolitical disaster of the century.  For the Russian people, it was a genuine tragedy.”  He’s talking about what you did.  How do you assess his assessment?  Was bringing down the Soviet Union the greatest tragedy of the 20th century?

GORBACHEV (through translator):  First of all, he has a right to his own opinion, and he has a right to speak out, to say anything, whether positive or critical about me.  I, when I do not accept or do not like his policies, also say that very directly.  So, I think this is a very direct discussion, and that’s important.

AMANPOUR:  Do you think the collapse of the Soviet Union, which you engineered, is a genuine tragedy for Russia?

GORBACHEV (through translator):  Well, you are stating that I engineered it.

GORBACHEV (through translator):  You will not find in any of my speeches until the very end anything that supported the breakup of the union.  The breakup of the union was the result of betrayal by the Soviet nomenklatura, by the bureaucracy, and also Yeltsin’s betrayal.   He spoke about cooperating with me, working with me on a new union treaty, he signed the draft union treaty, initialed that treaty.  But at the same time, he was working behind my back.  And that, of course, is not, frankly, policy.  That is, I think, deception.   And let me tell you that our friends, including our friends in the United States, they spoke very sympathetically about the need to preserve some form of union.  They said that it should be preserved.

But at the same time, when the breakup started, they were rubbing their hands.  They were rubbing their hands, I would say, below the table.   And by the way, Yeltsin and his team felt support from certain members of the U.S. administration, such as Cheney and Gates, who established a channel of communication with Yeltsin.   They believed that Gorbachev was someone who would still try to implement his plans, which they did not particularly like.  They said, “We like Yeltsin’s plans more,” the plans to destroy the union, to destroy or damage the Soviet economy and the Soviet armed forces.  So, they said, “We need to bet on Yeltsin rather than Gorbachev.”

President Bush, by the way, resisted this approach.  And he said to the Baltic politicians, he said, “It is your right to seek independence, but you should do it in a way that would not destroy Perestroika.

Amanpour airs weekdays on CNN International at 3:00pm with a replay at 5:00pm Eastern in the U.S.  and at 21:00 CET, with a replay at 23:00 CET.  This program will also be available via www.cnn.com/amanpour on Friday, April 26.  The full transcript of this program may be found here later today.