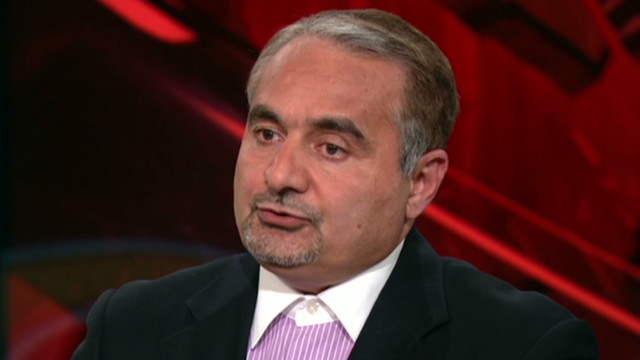 On the Wednesday, April 24th edition of Amanpour, Christiane Amanpour interviewed Hossein Mousavian, a former member of Iran’s nuclear negotiation team, regarding his insights on Iran’s nuclear program.  Mousavian offered signs that he feels indicate Iran is negotiating in good faith with the international team on nuclear weapons nonproliferation.  This is the exchange:

AMANPOUR:  …When I spoke to Israel’s defense minister, Ehud Barak, last week, I promised to bring the other side.  And who better to give it than a former member of Iran’s nuclear negotiating team… Hossein Mousavian spent decades as part of Iran’s foreign policy team, most recently serving on the nuclear negotiating team.  But when conservative Mahmoud Ahmadinejad took over the presidency in 2005, Mousavian was ousted for his moderate views, and soon after was charged with espionage, a charge that was later dropped.  He was cleared of it.

Today, he’s a visiting scholar at Princeton University.  Mousavian says that he is not seeking asylum and fully intends to go back to Iran.  But for now, he’s here, uniquely qualified to give us a glimpse into the minds of the Iranian leadership.  Ambassador Mousavian, thank you for joining me —

AMANPOUR:  –thank you for coming in.    You heard Senator John Kerry and you’ve heard a lot of people, including Iranian officials, sound optimistic about the talks that have already got underway.  Are you — do share that, having spoken to your former colleagues, who know about the negotiations?
MOUSAVIAN:  I am also optimistic.  The reason is in Istanbul for the first time, they agreed to find a solution in the framework of NPT before the P5+1, they were asking measures beyond NPT.  And the second principle they agreed, reciprocity in previous negotiations, the P5+1 always asking Iran to show confidence-building measures and to take steps.  Now the base is reciprocity.  The third is mutual confidence building.  I believe the lack of trust is mutual, and also the last, which was very important, I believe, they agreed to work on step-by-step plan.  These principles are very positive.

AMANPOUR:  So the NPT, the nuclear Non-proliferation Treaty, is something that is a concession, then to be able to have the basis of negotiations on that.    What do you think is an outline of negotiations that could be successful?  What is Iran willing to give?

MOUSAVIAN:  The key issue would be whether the P5+1 would be ready to go for a broader package on the nuclear issue or would seek a piecemeal approach, a one-step move.  If they have agreed in Istanbul to have a step- by-step plan, they should define a broader package to define all the steps.  What is important for Iran?

First, to recognize the legitimate rights of Iran under NPT, which includes enrichment; second, to remove Iranian file from the agenda of the United Nations Security Council and IAEA, to normalize the file; and third, to remove sanctions.   What are the major requirements for issues the P5+1 are looking?  First, for Iran not to have nuclear bomb, all assurances that Iranian nuclear program would ever remain peaceful.  Iran would remain as non- nuclear (inaudible) state, to add this all IAEA’s ambiguities, technical questions, including possibility of dimensions.  These are elements of the package which they should agree about.

AMANPOUR:  So what we’re hearing now from both Western and, in fact, Iranian officials, who are giving interviews and speaking inside Iran, that if they do have the declared right to enrich that they would cease to enrich or minimize or — I want you to tell me what they will do with 20 percent enriched uranium?  Will they stop it?  Will they get rid of their stockpile?  What will they do?

MOUSAVIAN:  If, Christiane, the NPT is going to be the framework, therefore they should not discriminize (sic) Iran under NPT.  But if they have problem with a stockpile of the 20 percent, they can agree on some confidence building measures about the stockpile, what portion of the stockpile Iran needs (inaudible) to divert to fuel rod, the rest, Iran can pay — it can export in order to assure Iran is not stockpiling the 20 percent for bomb.

MOUSAVIAN:  I believe what already Iran has informed IAEA, which they would stop for the moment to have only the two enrichment sites at Natanz and Fordo is one big step, because Iran already announced they would go for 10 enrichment sites. This is a big step already Iran agreed.  The second on Fordo, I believe that the policy which they negotiate with Iran should be transparency, Fordo to be 100 percent under the IAEA supervision.

AMANPOUR:  So the additional protocol?

MOUSAVIAN:  From the beginning, Christiane, I tell you Iranian Supreme Leader told us the time (inaudible) negotiating and I am sure I know he has had the same policy with such others (ph), I mean, Aloijani, Jaleeli (ph).  He has never had problem on transparencies, never.

AMANPOUR:  When you were negotiating, there was a suspension of enrichment, and there was the additional protocol in place for something like 20 months.  Do you think some kind of suspension is in the offing?

MOUSAVIAN:  No, I believe the suspension era is over because now Iran has 9,000 (ph) centrifuges and I believe they should not discuss suspension any more.  They should concentrate on the measures for transparency, confidence building.   Every measure which can assure international community that Iran would have open fuel site (inaudible), would be 100 percent open to IAEA for inspections, for verification, accountability.  These are the major elements (inaudible) should negotiate.

AMANPOUR:  As you know, part of the problem is that people are very skeptical, if not downright disbelieving of Iran’s words and its intentions.  You know, the Israelis just simply don’t believe words.  They want to see actions.  Many in the United States as well.    How did this meeting in Istanbul begin?  What did your contacts say?  What — was there a message from President Obama?  What was said at this meeting (inaudible)?

MOUSAVIAN:  (Inaudible) at the beginning I had President Obama had a positive message, mentioning the rights of Iran, respecting the rights of Iran and respecting the Iranian leaders’ fatwa.  Already President Obama made an interview with “Atlantic,” where he said we count on the fatwa.   And American delegations also in the meeting, they reiterated on the fatwa.  But some people like Israelis, they are questioning the fatwa.

AMANPOUR:  So we’re talking about the fatwa, the religious edict that the Supreme Leader issued?

AMANPOUR:  People are saying, well, how do we know it’s real?  It’s not written down.  What is it/  I mean, there’s a certain group who are saying —

MOUSAVIAN:  — Christiane, you remember in 1980 to ’88, Iran was invaded by Iraq.  Iraq used chemical weapons against Iran.  This was the first use of weapons of mass destruction against a country after the Second World War.  Iranian army asked the Supreme Leader, the then-Supreme Leader, Ayatollah Khomeini, to reciprocate (inaudible).

But even that time, the supreme religious leader said using chemical weapons, weapons of mass destruction are Haran (ph).  I believe the time that a country invaded Iran, used chemical weapons against Iran, weapons of mass destruction, and Iran did not respond, based on religious fatwa.  This is the best indication about the credibility of the fatwa.

AMANPOUR:  Does the fatwa have to be written down?

MOUSAVIAN:  Iranian official position always has been clear.  They have frequently announced that Iran is not going to attack Israel.  Unfortunately, this has been Israel, frequently even now is threatening Iran with nuclear — with military attack.    But Israelis, they are making argument about threat.  Iran does not have nuclear bomb.  Iran has not decided to make nuclear bomb.  And this is the consensus between (inaudible) and Americans also.  And even Iran has never made a threat for military strike against Israel.

AMANPOUR:  To be continued, Ambassador Mousavian, thank you very much indeed for being here.

MOUSAVIAN:  Thank you very much.

Amanpour airs weekdays on CNN International at 3:00pm with a replay at 5:00pm Eastern in the U.S.  and at 21:00 CET, with a replay at 23:00 CET.  This program will also be available via www.cnn.com/amanpour on Thursday, April 25.  The full transcript of this program may be found here later today.