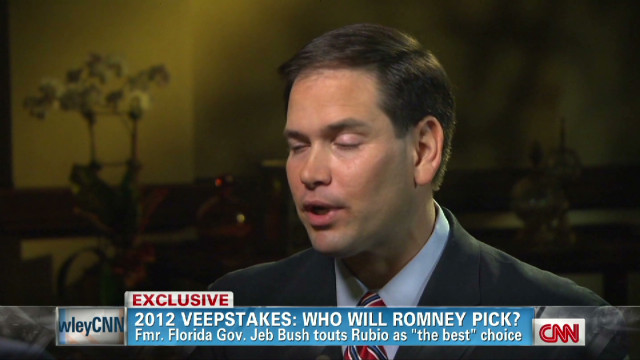 Sen. Rubio: I’m going to be respectful of the VP process

In an exclusive sit down on CNN’s State of the Union with Candy Crowley on Sunday, U.S. Senator Marco Rubio commented on speculation that he may be selected as the vice presidential nominee by GOP presumptive nominee, former Massachusetts governor Mitt Romney.  A highlighted excerpt from this interview is below.

CROWLEY: Jeb Bush – your mentor, your colleague – says he really hopes if Mitt Romney comes to you and asks you ‘I want you to be vice president’ that you would say yes.

CROWLEY: And he in fact indicated he’d certainly look at it.

RUBIO: Yeah, well that’s good because I think he’d be a fantastic vice president. But let me just say this about the vice presidential process. Up to now it’s all been theoretical, we have a nominee now, and our nominee, Mitt Romney, the leader of the Republican Party, has a vice presidential process in place. And I think from this point moving forward, I think it’d be wise for all Republicans to kind of respect that process, myself included, and say moving forward, we’re going to let his process play itself out. He’s been a great decision maker throughout his career in both the private sector and in politics and he’s going to make a great choice.

CROWLEY: Sorry, do you still stand by ‘I wouldn’t accept it if he offered it?’

RUBIO: Yeah, I’m not even going to discuss the process anymore. I’m going to be respectful of the process he’s put in place. And I think that’s-

CROWLEY: That’s kind of different though, than what you said before.

RUBIO: No, it’s the same. I think the fairness in it is that he now has a real process in place. He has folks that he’s hired and has asked to go through a vice presidential process. The last thing he needs are those of us in the peanut gallery to be saying what we would or would not do. So, here’s what I know: I know that Mitt Romney’s going to make a great choice for vice president. And I know Mitt Romney’s going to make a great president for this country.

State of the Union with Candy Crowley airs Sundays at 9:00am and 12:00pm on CNN.  The full transcript for this program will be posted to http://www.cnn.com/transcripts later today.