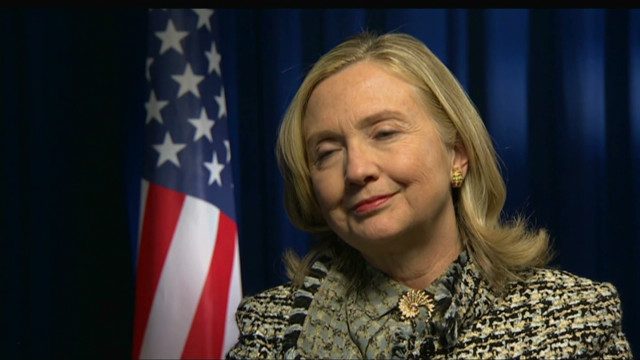 Secretary of State Hillary Clinton and Secretary of Defense Leon Panetta sat down with CNN lead political anchor Wolf Blitzer to discuss the photos published by The Los Angeles Times, the latest in global foreign policy issues and the 2012 presidential election.  Highlights from the interview are after the jump below. A full transcript of Part I is posted on http://archives.cnn.com/TRANSCRIPTS/2012.04.18.html and Part II will be posted on http://archives.cnn.com/TRANSCRIPTS/2012.04.19.html.

Highlights from Interview
THIS IS A RUSH FDCH TRANSCRIPT. THIS COPY MAY NOT BE IN ITS FINAL FORM AND MAY BE UPDATED

WOLF BLITZER, HOST:  If the President of the United States says, Madam Secretary, I need you on the ticket this year in order to beat Romney, are you ready to run as his vice presidential running mate?

BLITZER:   I think it is possible.  It’s unlikely.  You will say that —

BLITZER:  If he needs — if he sees in July that he’s going down, he doesn’t want to be a one-term president.

CLINTON:  But he’s — but this — you know, Leon and I are in this awkward position, because we were — we’ve both been in politics, and now we’re in two jobs that are out of politics for the — all the right reasons.  So I don’t comment on politics any more.

But I’m very confident about the outcome of this election, and as I’ve said many times, I think, you know, Joe Biden, who’s a dear friend of ours, has served our country and served the president very well, so I’m out of politics, but I’m very supportive of the team that we have in the White House going forward.

BLITZER:  They do an underground nuclear test, for example, what would you do?

PANETTA:  That would be, again, another provocation. And it would worsen our relationship.  I’m not going to get into how we would respond to that.  But, clearly, we are prepared at the Defense Department for any contingents.

BLITZER:  There are 30,000 U.S. troops along that demilitarized zone —

PANETTA:  No question.  You know, we’re within an inch of war almost every day in that part of the world, and we just have to be very careful about what we say and what we do.

BLITZER:  Does that keep you up at night more than any other issue?

PANETTA:  Well, unfortunately, these days, there’s a hell of lot that keeps me awake.  But that’s one of the ones at the top of the list.

BLITZER:  What are the others?

BLITZER: What do you think of this new young leader of North Korea, Kim Jong-un?  Not even 30 years old.

CLINTON:  Well, we really are waiting and watching to see whether he can be the kind of leader that the North Korean people need.  I mean, if he just follows in the footsteps of his father, we don’t expect much other than the kind of provocative behavior and the deep failure of the political and economic elite to take care of their own people.

But he, you know, he is someone who has lived outside of North Korea, apparently, from what we know.  We believe that he may have some hope that the conditions in North Korea can change.  But again we’re going to watch and wait.  He gave a speech the other day that was analyzed as being some of the old — same old stuff and, you know, some possible new approach.  But it’s too early.

PANETTA:  Well, there — I don’t usually use those words in public, but it was — it was very disturbing.  And the reason it was disturbing is that whether it takes place in Colombia or any other country or in the United States, we expect that our people behave according to the highest standards of conduct.  That obviously didn’t happen here, and as a result, we’re investigating the matter and as a result of that investigation, we’ll hold these people accountable.

CLINTON:  Oh, I don’t think so much diplomatic fallout as the unfortunate fact that it certainly ate up a lot of the coverage of the summit, which was a meaningful get-together.  It only happens once every three years, an opportunity to showcase Colombia.  Think about how much Colombia has changed.

And the United States, with our Plan Colombia support, has really been at the forefront of helping Colombia emerge as a real dynamo in the region.  As Leon said, there will be investigations, both in the military and in the Secret Service.

You know, I’ve had Secret Service protection for more than 20 years, and you know, I’ve only seen the very best, the professionalism, the dedication, of the men and women who have been around me and my family.

BLITZER:  So this is money well spent, hundreds of billions of additional dollars, is that what you’re saying?

CLINTON:  I think you can certainly find fault with any kind of war.  And this has been a war.  You can go back and look at any of the wars that the United States has fought.

But if you consider why the — why we’re there and the fact that, thank goodness, we’ve not been attacked again since 9/11 and we have dismantled al Qaeda thanks to a lot of great work when Leon was at the CIA, before going to the Defense Department.

But we — we’re not resting on our laurels.  We’re looking forward to what kind of relationship we all will have, NATO and the United States, after 2014, to help Afghanistan continue on this path.

PANETTA:  He — he is the leader of Afghanistan.

BLITZER:  Do you trust him?

PANETTA:  Well, I mean I — I’ve sat down with him.  I talk with him.  We talk pretty frankly with each other.  And, you know, he is — he is the the leader and he is the person we have to deal with.

BLITZER:  Does that mean you trust him?

PANETTA:  Well, I mean, certainly, you know, you — you trust the leaders that you — you have to deal with.  But you always kind of watch your back at the same time.

BLITZER:  That doesn’t sound like a ringing endorsement of the leader of Afghanistan.

BLITZER:  But this one has said awful things about the United States.

PANETTA:  No, I understand.  And, obviously, that’s been — that’s been a concern.  But at the same time, we have had the ability to directly relate to him when it comes to some of the major issues that we’ve had to confront.

BLITZER:  — Are you going to run for President of the United States?

CLINTON:  Well, let me depersonalize this.  Let’s take it away from me.  Of course I believe it’s time for a woman to be president.  I was just in Brazil with extraordinary Dilma Rousseff, the president of Brazil, at the Summit of the Americas.

We had, you know, three presidents, two prime ministers of countries in our hemisphere.  We just saw a woman succeed to the presidency of Malawi.  It’s happening in the world, and obviously –……

BLITZER:  You know, they really want you.  And a lot of Democrats and others, they would like to run in 2016.  I just see you smiling.  (Inaudible) —

CLINTON:  Look, I’m flattered.  I am honored.  That is not in the future for me, but obviously I’m hoping that I’ll get to cast my vote for a woman running for president of our country.