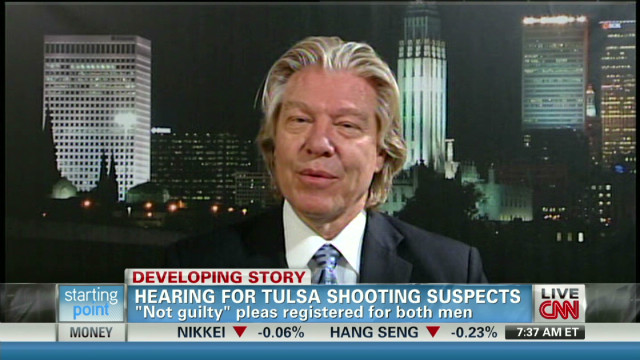 Brewster says, “The letter [from Jake England’s mother] gives us a little bit of history as to where this young man came from and what he was about and what he went through in life. As this case was progressing nationally with the theme or premise that this was a hate crime, when we met the young man and understood more about him, we realized that that was a complete mis-premise. He grew up in North Tulsa, which is predominately African American, that’s where is home was. Most of the people that he counts among his friends, close friends, are African American, his neighbors are African American. Nobody’s ever really, that knew him, claimed that he is a racist. I think the circumstances of this case given all of the evidence will show that he did not have that motivation whatsoever.”

When O’Brien cites England’s Facebook post as possible evidence of racism, Brewster responds, “The fact that he uses that term and is comfortable in using that term in describing in a real derogatory fashion one person, does not make him a racist. That term is used rather frequently by people that live in that area, both black and white. It is a very derogatory term and he used the most derogatory term he could to describe the person that he witnessed shoot his dad in the heart.”