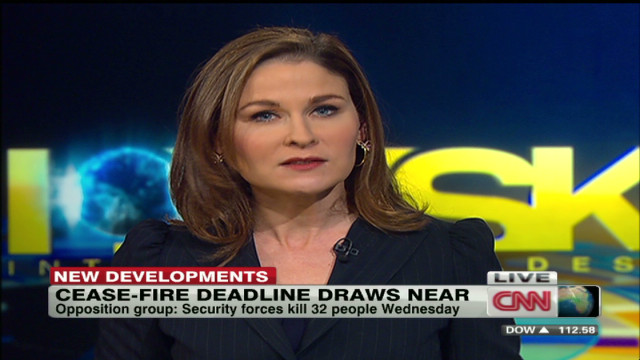 “We are fully committed to have a successful mission for Mr. Annan, but at the same time people should know that I can say optimistically that 40% of the keys to solve the crisis is in our hands as government but the other 60% is in the hands of those who are harboring, channeling weapons, instigating in the media, against Syria,” said Makdissi.

Makdissi also said it will take more than Syrian forces to stop the violence, adding the presence of United Nation observers on the ground will be essential to verify the cessation of violence.

“We are not afraid of the reality of the Syrian story,” he said. “We want them to be on the ground and see for themselves who is violating this.

Full transcript after the jump.

***ANY USE OF THIS MATERIAL MUST CREDIT CNN INTERNATIONAL***

HALA GORANI, CNN INTERNATIONAL ANCHOR: So let’s hear directly from a foreign ministry spokesperson. Less than an hour ago I spoke with the spokesperson for the Syrian Foreign ministry, Jihad Makdissi. I began by asking why after more than a year of violence, the world should believe the Syrian government when it says its military will cease all violence. Listen to his response.

JIHAD MAKDASSI, SYRIAN FOREIGN MINISTRY SPOKESMAN: You don’t need to believe us, Hala. If you read thoroughly the plan of Mr. Annan you will find out there will be observers, military unarmed observers sent to Syria these observers will be operating according to a protocol that we are now negotiating with the technical team of Mr. Annan. Those people will be telling you the truth as other observers did before and nobody believed them.

GORANI: So let me ask you this. What you are saying is that there will be observers from the United Nations to verify that the military has withdrawn. Is that what you’re saying?

MAKDASSI: Not only the military. The cessation of violence, Hala. Someone needs to say you cant be relying on Al Jazeera or al Arabiya or YouTube.  We will be having once we sign on our protocol we want Mr. Annan to send them [observers] as soon as possible. We are not afraid of the reality of the Syrian story. We want them to be on the ground and see for themselves who is violating this.

GORANI: Let me ask you when will this UN observer team then, this mission, that is designed and whose goal is to verify the cessation of violence. When will it go to Syria?

MAKDASSI: My dear, It’s not up to Syria what I can tell you from the Syrian side is we are fully committed to this. There is a protocol to be signed. I can tell you we have negotiated almost 85-90% of it. We are still waiting for the team to come back to review the negotiation and as soon as possible, if last week they can come. The delay is not from our side.

GORANI: Where is the delay coming from then?

MAKDASSI: There is no delay – they have just announced the plan. We have committed ourselves to the plan. Tomorrow there will be cessation of all military action. We’re just waiting. I think in a few days, let’s be optimistic.

GORANI: So you think in a few days, and you’re being optimistic, your own words, that a UN observer team will be on the ground to observe the cessation of violence across Syria?

MAKDASSI: No, Hala, I am very accurate in what I am saying. I am saying that the Syrian team is ready to finalize the protocol that we have already begun negotiating. But it’s not up to us, it’s UN observers. I can’t tell you when they will come. What I can tell you is that they are very essential to monitor any violations. This is what I can tell you. But I am not (inaudible) behind it.

GORANI: When you say a few days, you think possibly it could be longer and you’re saying it is not dependent on the Syrian government when the timeline is for this observer mission?  I am trying to get the statement accurately here.

MAKDASSI: The statement is the following. We are now negotiating with Mr. Annan technical team the modality and the form of this protocol. It will be very in a way similar to the one the Arab League operated under which. Once they sign this they can come the same day.

GORANI: Alright well let me ask you then about what is going on today. This is a few hours before this agreement with the Annan plan that you say will lead to the cessation of military activity at 6am Damascus time on Thursday. We are hearing reports there are tanks in the center of Hamas today. That there has been shelling in Hamas province as well today. Can you confirm that?

MAKDASSI: I can’t verify anything. What I can verify to you Hala, you have to know that my hat is foreign ministry spokesman. What I can tell you is that there is a clear instruction to be on the defensive mode by our  army what I can tell you is even according to the Annan plan. If you read it the Annan plan there are 6 points. There are letters exchanged with my Foreign Minister and Mr. Annan. In these letters Mr. Annan himself acknowledged the right of the Syrian army to respond to any violence by those armed groups. What I can tell you starting tomorrow cessation of all military action. We need the observers to monitor any violation. The commitment of  Syria to have successful mission for  Mr. Annan is unshakeable but at the same time you have to know 40% in our hands but you have also to tell Mr. Annan to go do his homework with other parties. You have regional countries who are harboring non state actor harboring militia against Syria,. You have foreign ministers saying publicly they are financing and militarizing the Syrians. Those people are hindering the mission of Mr. Annan.

GORANI: Yes, but in the end it’s the Syrian army, Jihad Makdissi, against opposition, some of whom may be armed, but then you have peaceful demonstrators as well as the shelling of civilian areas. Has that not happened?

MAKDASSI: You are simplifying. You are simplifying the crisis in Syria, Hala.  If you read very well the Annan peace plan you will notice that the cessation of violence by all parties, so not the cessation of violence by the Syrian government, by all parties. That’s why I’m telling you the problem part in the hands of Syria we are committed to solve this part, but the other are in the hands of those people who have for geo-political reasons, for sectarian reasons, for I don’t know which reasons they call on themselves in destabilizing Syria.