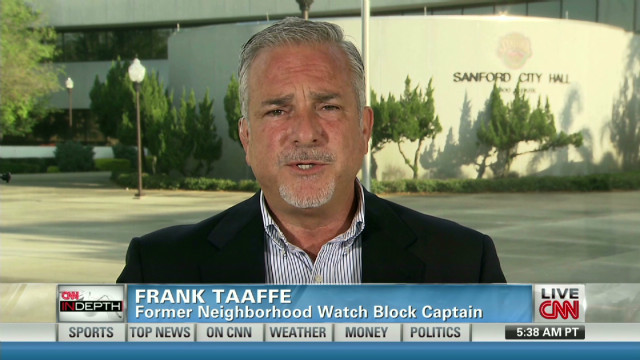 Zimmerman neighbor, fmr. Neighborhood Watch captain: Prior burglaries were by ‘young black males;’ ‘if you plant corn, you get corn’

Frank Taaffe, George Zimmerman’s neighbor and former Neighborhood Watch captain, tells CNN’s Soledad O’Brien that prior robberies in area were by young black males and that Zimmerman protected his residence from a potential burglary on February 2nd. Taaffe denies telling The New York Times that the prior burglaries were done by “Trayvon-like dudes with their pants down.”

Taffe says, “We had eight burglaries in our neighborhood all perpetrated by young black males in the 15 months prior to Trayvon being shot. It would have been nine — there would have been nine, but George Zimmerman through his efforts of being a neighborhood watch captain helped stop one in progress, documented in the 911 calls February 2. My house was being robbed, and George on his nightly rounds watched this burglary in progress, called Sanford P.D., waited for them, and helped ensure that nothing bad happened to my house. And it’s documented the 911 call for February 2. That was my residence that George Zimmerman helped stop.”

Taaffe continues, “All of the perpetrators of the burglaries, the prior burglaries, were young black males.”

When O’Brien presses on how this comment relates to Trayvon Martin, Taaffe responds, “There’s an old saying if you plant corn, you get corn.”

O’Brien asks for further clarification, and Taaffe says, “It is what it is. It is what it is. I would go on record by stating that of the eight prior burglaries in the 15 months prior to the Trayvon Martin shooting, all of the perpetrators were young black males.”