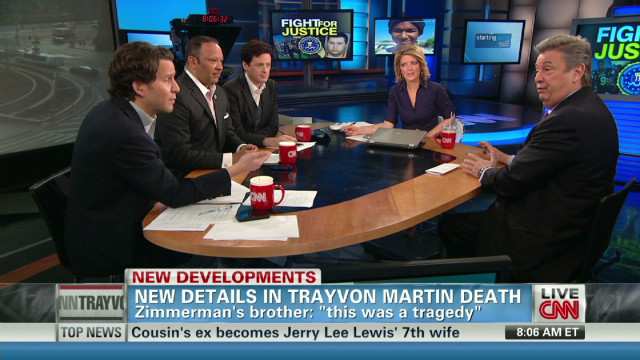 Palumbo says, “I don’t want to taint this for you any further. But Zimmerman’s father is also a judge. If you look at the Van Der Sloot case in Aruba where we had some influence with the father. You may have the same thing going on here.”

After Cain disagrees with the comparison, Palumbo adds, “What would be so surprising? I can tell you this right now. I’m a little reluctant but I’ll just tell you that. Every time we run into people in our own community, the law enforcement community, we show them difference. Lawyers do it. Doctors do it. What would make you think the judicial system would not do it for a judge? I’m confused.”

Palumbo answers, “Logic? This whole case is devoid of logic.”

Fugelsang adds, “So, Trayvon may have had weed in his bag once and that’s relevant. But the fact that a shooter’s father is a judge, that’s not relevant?”

Cain responds, “Let’s make one thing clear to you, have I ever sat this table with you and suggest that Trayvon’s marijuana residue is relevant here?”