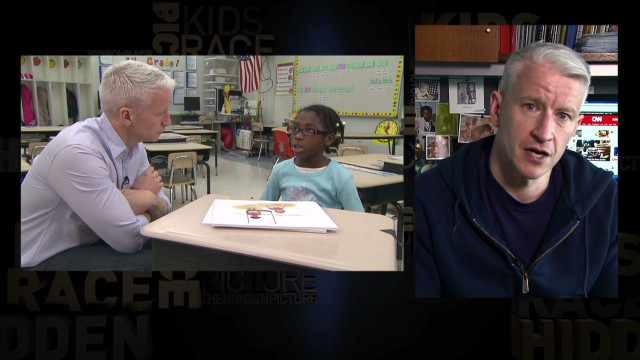 Kids on Race: The Hidden Picture, to Air week of April 2nd

Race relations is one of the most explosive issues in America and for many it’s one of the most taboo to talk about, especially with children. CNN’s Anderson Cooper 360° is exploring the topic of children and race in a week-long series and with special programming throughout the network and online. Children can be a mirror of society and their opinions can often tell how far we have come and still have to go when it comes to race relations in America.  For this special report, Anderson Cooper 360° contracted a renowned child psychologist to help us understand how race influences a child’s world.  Anderson Cooper will talk with the children and their parents and their brutally honest, inspiring answers will become a wake up call that will spark a national conversation.

The series titled “AC360 Special Report: Kids on Race, The Hidden Picture”, will air the week of April 2nd at 8 and 10pm ET.  The CNN commissioned pilot study builds on the original Doll Test’s historic research done in the 1940s that examined how African -American children interpret race, discrimination and stigma. Teaming up with child psychologist Dr. Melanie Killen, the Anderson Cooper 360° ground breaking report scientifically explored how kids view interracial contact in their daily lives. The children, ages six and thirteen, were shown images that were scientifically designed to be ambiguous to children.  “What is happening in this picture” was the starting point for interviews conducted with the group of 145 African-American and Caucasian children in six schools across three states. The report explored how children’s interpretations of the images often changed when the races of the characters were switched.

This series will tackle controversial issues and answer some difficult questions. Is race a factor in how children view conflicts and choose friends? Do children see race or are they, as many parents believe, socially colorblind? How, when and why do they form their opinions on race? Can those opinions change over time or at a certain age, are kids “hard-wired” about race? And does the racial make-up of their school and environment affect their opinions on race?  Cooper along with CNN anchor Soledad O’Brien will share with the viewers the children’s answers and the conclusions our researcher drew from their responses.

They will also speak to the parents for their thoughts and reactions to conversations on interracial dating and bullying.
Online, videos from the series, commentary and other text pieces will be available on CNN.com and the AC 360 blog.