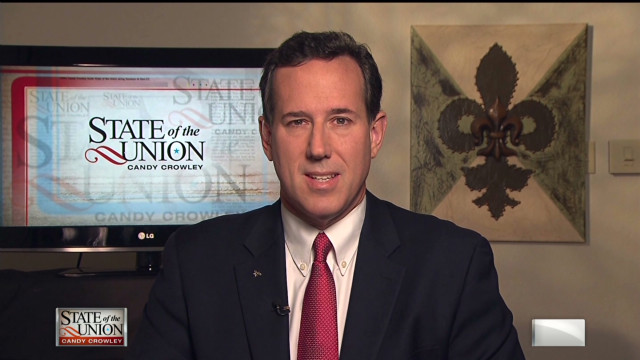 Santorum on State of the Union: “We are in this to win.”

Today on CNN’s State of the Union with Candy Crowley, Republican presidential hopeful and former Pennsylvania Senator Rick Santorum spoke about GOP rival Mitt Romney, the possibility of a brokered convention, and defended his assertion that the Department of Justice favors pornographers over children and families. Highlighted excerpts are below, and a full transcript may be found here.

SANTORUM: Well, no, I was the number two guy at a small technology company and did, in fact, help manage and get this company off the ground and as a startup. And it was a great experience and one that I learned a lot through that process. So that’s not completely accurate.

I served on the board of a public company. So I, you know, I have some — obviously was a lawyer and practiced law for a while. So I’ve had a fair amount of experience in the private sector.

On the possibility of a brokered convention

CROWLEY: — is different than his counting. But just if you — if you should get to a point where you no longer — you look at it and your math says to you, I can’t get enough delegates in this process, would you say, but I’m going to stay in and deny it to Mitt Romney and go for that brokered convention?

SANTORUM: Well, obviously, you know, we are in this to win. We’re in this because we think that we’re the best candidate to take on President Obama, and we believe that Governor Romney is not.

SANTORUM: When you have this amount of resources and this amount of advantage, you can’t manage and deliver the mail and win this nomination, that shows a real weakness in his ability to be able to govern.

On his assertion that DOJ favors pornographers over children and families

CROWLEY: Do you honestly believe there are people in the Department of Justice who favor pornographers over children and families? Do you believe that?

SANTORUM: You have to look at the proof that’s in the prosecution. Under the Bush administration, pornographers were prosecuted much more rigorously than they are under existing law, than they under the Obama administration. So you draw your conclusion.