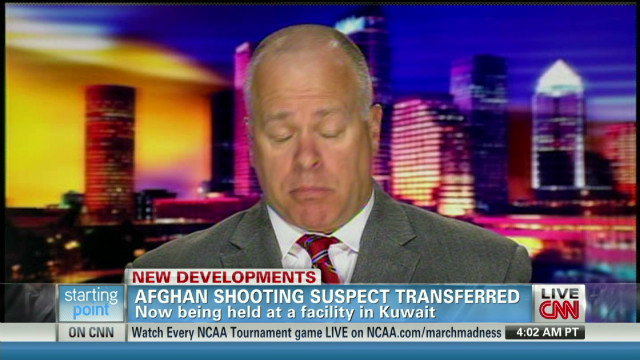 Fmr. CIA head of Bin Laden unit on US soldier: could be moved back to Afghanistan

On Starting Point with Soledad O’Brien, Gary Berntsen, former commander of the CIA’s Bin Laden unit in Afghanistan, discusses the potential fallout of the U.S. moving the Afghanistan shooter to Kuwait, Leon Panetta security scare and sustained American presence in the country.

On the U.S. soldier accused of killing 16 Afghans being moved to Kuwait, Berntsen says, “The Afghans are not going to be happy about this…. There are members of the Afghan parliament that are complaining already, I’m sure that they will cull members of the Karzai administration in front of them to question them on this…. I suspect that Afghans will want him tried back in Afghanistan. Moving him out to Kuwait doesn’t preclude the Army from moving him back in there to Bagram for a trial in the end.”

He continues, “They did a poll about a year ago on the Afghan men between the ages of 20 and 32, and 90 percent of them didn’t know why we were there, didn’t know about 9/11. Afghanistan is a country with a very, very low literacy rate. We are losing the I.O., the information operations war, the propaganda war. The Taliban respond very quickly to attacks. They put out information that the United States are occupying force, despite the fact that we’re there at the desires of the Afghan government that we built thousands of schools. I mean, we’ve done a lot of good work there. The majority of Afghans support our presence there, but, you know, Pakistanis, Iranians, militant groups on the Afghan border don’t want us there and are conducting a propaganda war against the U.S. with some success.”