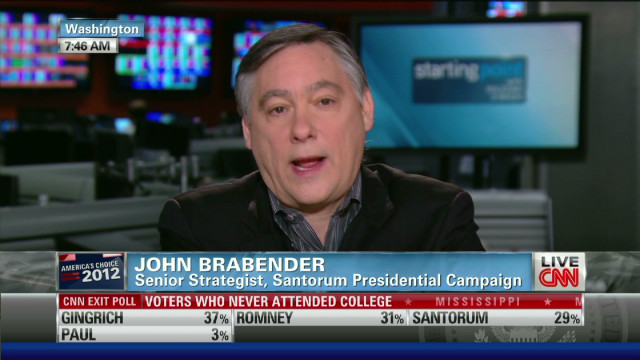 Santorum rep. on primary wins and other candidates; Romney as ‘Barack Obama light’

Rick Santorum Senior Strategist John Brabender opens up to CNN’s Soledad O’Brien about campaign, other candidates after primary wins in Mississippi and Alabama.

Brabender says, “Yes, I mean, everybody thought I think Romney was going to win Mississippi and everybody thought Gingrich was going to win Alabama and Rick Santorum won both of them coming off the heels of winning Kansas on Saturday. So it’s an exciting time for the campaign and I think Rick Santorum said it best that a lot of average Americans are showing people the pollsters don’t know as well as they do. And so it was a pretty big upset last night and certainly gives the campaign a tremendous amount of momentum.”

When O’Brien asks Brabender about Romney saying that Santorum “is at the desperate end of his campaign,” he replies, “I’m not sure I’m going to listen to the value judgment of a guy who strapped his dog on the top of the roof of his car and went hurling down the highway.”