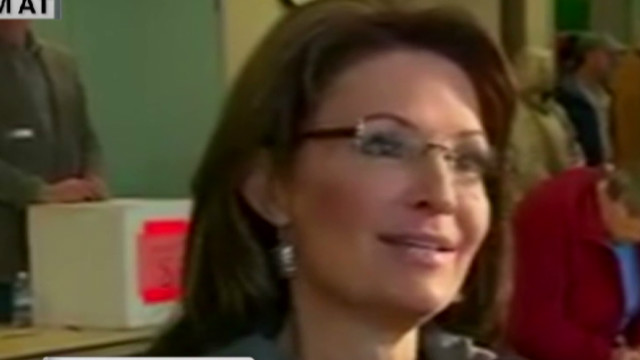 Palin: “As I say, anything is possible…and my plan is to be at that convention.”

EMBEDDABLE VIDEO: Palin: Not ruling out run in 2016

WOLF BLITZER, CNN ANCHOR: Our Paul Vercammen is up there in Wasilla, Alaska. Remember, Wasilla, we heard a lot about Wasilla only a few years ago. Paul Vercammen is standing by with a very special guest — I’ll give you a hint, the former governor of that state. Paul, talk to her.

PAUL VERCAMMEN, CNN CORRESPONDENT: I will, Wolf. By the way, Sarah Palin says hello. She just voted here in Wasilla. They expect 1,000 people to come through here.

And I think, Sarah, a lot of people are asking, who did you vote for tonight? Who would you like to see emerge as the GOP frontrunner?

FORMER GOV. SARAH PALIN, R-ALASKA: I would not tell you who I voted for in this presidential preference poll. I want to say hi to Wolf, though, and thank you guys for being up here in Wasilla and covering this, because every vote counts, and every district, every state matters. And that’s why I wanted to see this process continue because I want more people to have a say in who the nominee should be.

VERCAMMEN: But while you won’t say who you’re leaning for, are there any trends or is there something that you think is extremely important to the GOP platform this year that you want to see come to fruition?

PALIN: Yes. I want to see the process continue, more debate about who it is who can bust through the Orwellian Obama rhetoric and pandering that we see in the incumbent, who can bust through that with facts, with history, with logic, with common sense, in order for American voters to understand we do have a choice. There is a contrast between the incumbent, Barack Obama, and any of the four on the GOP ticket. Who best can bust through that rhetoric and express their ideas and their solutions to get our economy back on the right track, that’s the nominee I want to see forwarded (ph).

VERCAMMEN: Is there any fear that if this drags on for a long time, you are going to sap war chests and you’re going to cause a situation where the party becomes too divided?

PALIN: I am not a believer in that, not at this point. I do believe that competition makes all of our candidates better. Remember, there are five men running for president, and I think Barack Obama is the worst choice, is the last choice. So the four in front of him, as they duke it out in the arena of ideas and solutions to propose, the more of that, the better.

VERCAMMEN: Sarah Palin for president 2016, is it possible?

PALIN: Anything in this life, in this world is possible. Anything is possible for an American. And I don’t discount any idea or plan that at this point isn’t in my control. Anything’s possible.

VERCAMMEN: But would you seriously consider a run?

PALIN: I would seriously consider whatever I can do to help our country to put things back on the right track. Our economy, the foreign policy, proposals that we have to see put forward in order to secure our homeland, and the Americans, especially our brave fighting men and women who are overseas right now in places that perhaps we shouldn’t be right now. Anything that I can do to help, I will be willing to help.

VERCAMMEN: This year for you, what’s issue No. 1?

PALIN: Issue No. 1 is a combination of the economy and of the military needs that I, as — having a family member in the military, serving in a war zone right now, am intimately aware of. We do have some foreign policy proposals right now that the GOP is putting forth that I believe will help strengthen our military, won’t slash the military, our troops, the benefits that they have earned. So a lot of the military issues are important to me.

But of course the economy, getting the job market back humming again. And we do that by developing resources that we have up here in Alaska — our oil, our natural gas — all those things that are near and dear to Alaskans’ heart certainly are near and dear to Americans’ hearts, and there are a lot of things that we need to get working on with the economy and with the military.

VERCAMMEN: OK, one more question, from Wolf, if I can hear him. Let me try to relay it to you.

BLITZER: All right, Paul, I know there’s a delay between me and you, but thank the former governor, the Republican nominee for all of us. A quick question for her. I’m just curious how she’s been reacting to this whole Rush Limbaugh controversy with this Georgetown University law student, because there were some vile words that were uttered by some liberal Democrats as far as Sarah Palin was concerned, and I wonder if she wants to weigh in on this controversy.

VERCAMMEN: Wolf wants to know if you want to weigh in on this controversy. He says some vile words were thrown around, some of them directed towards you actually, the controversy involving Rush Limbaugh, contraception and the Georgetown student? Your reaction to some of those words that were used?

PALIN: I think the definition of hypocrisy is for Rush Limbaugh to have been called out, forced to apologize and retract what it is that he said in exercising his First Amendment rights, and never is that — the same applied to the leftist radicals who say such horrible things about the handicapped, about women, about the defenseless. So I think that’s the definition of hypocrisy. And that’s my two cents worth.

VERCAMMEN: I promise last question, this one from John King. And Todd, we apologize, Sarah’s husband has patiently been waiting–

PALIN: We thought we weren’t going to get busted walking through here today, and here you are.

VERCAMMEN: Go ahead, John, and go ahead with your question.

JOHN KING, CNN ANCHOR: Paul, I would ask the governor how likely does she think there’s a possibility of an open convention. And if there is an open convention and someone approached her and said, “Governor Palin, I want to place your name in nomination,” would she stop them?

VERCAMMEN: It’s the open convention question. If we wind up with an open convention and someone wants to place your name, throw your name into the hat, would you stop them? Would you be open to that?

PALIN: As I say, anything is possible. And I don’t close any doors that perhaps would be open out there. So, no, I wouldn’t close that door. And my plan is to be at that convention.

VERCAMMEN: I thank you profusely for stopping.

PALIN: You are a lucky dude that I did. Thank you.

VERCAMMEN: Thank you so much, and I appreciate Todd stopping as well and your family.

PALIN: OK, appreciate you, thank you.

PALIN: Thanks for being in Wasilla.

As we said, not just Sarah Palin, but to expect that as many as 1,000 people will come through here as multiple districts vote in Wasilla, Alaska, of course, very exciting, a wild card if you will. They’re not really sure how this will go tonight. You’ve got no political polling here, Sarah. Well, let me ask you while I’m here, do you feel like anybody has an advantage on the ground here?

PALIN: You know, there’s a strong libertarian streak here in Alaska, so I think Ron Paul is going to do very well. Romney won though four years ago the caucuses, presidential preference poll. So perhaps we’ll see a repeat of that. Newt Gingrich, though, he is the one who is spot on with energy development. That’s so important to Alaskans. And Alaska is a very, very conservative state, so red that Rick Santorum could be very well suited (ph) — so kind of I think a microcosm of the rest of the country. Things are up in the air. We don’t know.

VERCAMMEN: And if I might add, here in the Mat-Su Valley, they say that Santorum has been running very well among evangelical Christians.

PALIN: Sure, of which I am one. So, no, but again, all four candidates are great, and five men running for president, and the four that you just mentioned are better than the incumbent. Anybody but Obama.

VERCAMMEN: Right, thank you so much for taking time out.

PALIN: Thank you. Thanks.