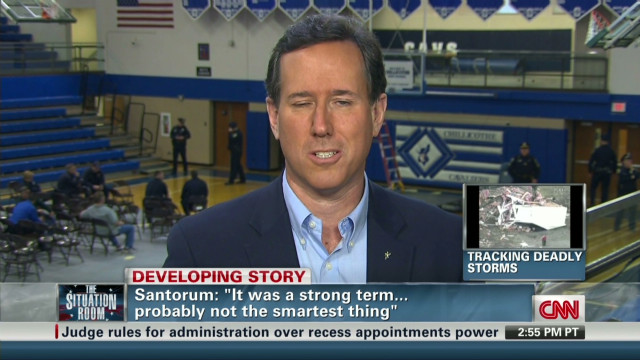 Santorum to Blitzer on Limbaugh: “He’s being absurd.”

Former Pennsylvania Sen. Rick Santorum spoke with CNN’s Wolf Blitzer about his recent comments calling Pres. Obama a snob and his thoughts about conservative talk show host Rush Limbaugh’s recent controversial remarks. A highlight from the interview is below. This interview is scheduled to air in the 5 p.m. ET hour of The Situation Room with Wolf Blitzer on CNN.

WOLF BLITZER, CNN ANCHOR:  Let’s talk about some domestic issues.  You know you got a lot of grief by suggesting the president was a snob, a snob for wanting kids to go beyond high school, get — get some college education or technical school, get a certificate, get some post-high school…

SANTORUM:  No.  No, I didn’t say that.  I — I — I was giving a long riff about the president mandating things on people.  I was talking about the government and president mandating health care and, you know, what kind of loans we’re going to get.  And — and then I went in and talked about the, you know, the — the issue of — of him now coming forward with the statement that every child should go to college.  And — and it was this attitude that government knows best.

And so I was commenting on the general attitude of, as I do in all of my speeches, of top down, government knows best.  And so I — I used the term snob.  You know, it was a — it was a strong term, probably not the smartest thing.

But the point was government shouldn’t be dictating to people what they do.  People should have opportunities and we should be — government should be in the position to encourage people, of course, to do things that upgrade their skills on a variety of levels, but to sort of say people should do this when it comes to four year college education, I just think, was a little over the top.

BLITZER:  All right.  Well, let — let’s talk about this other education issue.  You know about this Georgetown University law student, this Sandra Fluke.  Today, the president actually called her and supported her.  She’s getting criticized, as you know, by Rush Limbaugh, who — who has used some outrageous terms.  Even a spokesman for the speaker, John Boehner, is saying what Rush Limbaugh is saying is — is totally inappropriate right now.

But let me — let me play this little clip, because he’s — he’s — Rush Limbaugh is suggesting that by supporting government insurance, paid insurance for contraceptives, birth control pills or whatever, Rush Limbaugh suggesting she’s a slut or a prostitute.  And then he even goes further.

RUSH LIMBAUGH, RADIO TALK SHOW HOST:  So Ms. Fluke and the rest of you femi-Nazis, here’s the deal.  If we are going to pay for your contraceptives and, thus, pay for you to have sex, we want something for it.  And I’ll tell you what it is.  We want you to post the videos online so we can all watch.

BLITZER:  All right, go ahead.

I — I want you to respond to Rush Limbaugh.

I’m — I’m — I’m concerned about the public policy of this president imposing his values on the people — on — on — on — on people of faith who morally object to — to the government telling them they have to do something which they believe is a grave moral wrong.  And government should not be in the business of telling — you know, when you talk about the separation of church and state, you hear it all the time.

Well, the — the real separation of church and state in — that — that our founders believed in was that the state cannot tell people of faith what to do and run over their rights.

And that’s what this president is doing right now.

BLITZER:  You know, all of your fellow Catholics were not happy with your criticism of President Kennedy for calling for a separation of church and state.  You know, you said when you heard that speech, unwanted to throw up.

I want you to address your fellow Catholics and tell us how you feel about the former president of the United States.

SANTORUM:  Well, when I grew up in a home, my — I remember, you know, having a picture of JFK in the — in the house.  And we — I was very proud, as a Catholic, to finally have, you know, someone who was the first Catholic president.  And — and I was — it was a point of pride for — for me, and — and continues to be, the fact that this country, at that time, could elect a Catholic.  And — and he was legitimately — he had a legitimate reason to go and give that speech.

The problem is, he went farther than he should have.  And — and he did a lot of good things.  There were a lot of — I mean the vast majority of that speech I can agree with.  But there were some very key lines in there that I think has led to a degradation of — of religious liberty in this country, when he — when a president of the United States says that — that he believes in an absolute separation of church and state, that’s France.  That’s not America.

America believes in a vibrant public square with people of faith and no faith being able to participate lively in the discussion.

And if you go on and read President Kennedy’s remarks, he talks about he won’t — he won’t take any advice from anybody who has any faith.  I mean that’s not — I mean, I — you take advice from everybody, people of faith and no faith.

I mean this is — this is a very, very cold and naked public square, is what he was describing.  And it — and it was very disturbing to me that — that he would take — he would — he would take a legitimate issue and then just take that one step too far and I think it’s — it’s actually caused a — a — a discussion going forward in America that has limited people’s — people’s rights, as now you’re seeing with now the president turning it on its head and saying not only people, you know, can’t come into the public square, he’s — he now talks about not freedom of religion, but freedom of worship, which means very — something very different than freedom of religion.  Religion is practiced outside of worship.  But you hear the president and the secretary of State using those terms instead of freedom of religion or freedom of conscience.

And you have the president now imposing his values on people of — of a particular church.  This is a very, very brave new world where — where government can — can saddle people of faith with — with values that are inconsistent with their beliefs.