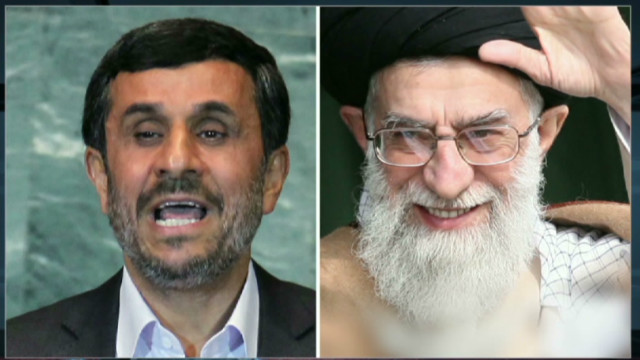 CNN’s Ivan Watson (@ivanCNN) is being allowed inside Iran to cover the country’s first elections since 2009.  Below is his live report with Wolf Blitzer on The Situation Room.

WOLF BLITZER, HOST:  But right now, there’s something we rarely see.  One of our own CNN correspondents, Ivan Watson, has been allowed inside Iran to report live on the country’s first elections since 2009, when a bitter dispute over results sparked weeks and weeks of bloody, deadly protests.

Ivan is joining us now.

Our broadcast capability is limited, I just want to warn our viewers — but, Ivan, there’s been some talk, as you know, about a potential rift between the president, Ahmadinejad, and the Supreme Leader, the Ayatollah Khamenei.

Is that what this election is now coming down to?

IVAN WATSON, CNN CORRESPONDENT:  Well, certainly, some of the political analysts we’ve talked to here are saying that there — there is competition between rival conservative factions within the regime in this election, a block of candidates supporting Ahmadinejad, and others that are basically against him and more allied with the supreme leader, Ayatollah Ali Khamenei.  The reason being, there have been some public disputes over the last year where Ahmadinejad disappeared for 11 days after the supreme leader overruled his decision to — to sack, to fire an intelligence minister.  And there’s been a lot of criticism and even some investigations coming from certain branches of the government into some of Ahmadinejad’s top aides.

It is important to point out, though, Wolf, that the supreme leader has been making a public appeal for unity in the run-up to this vote, saying it’s very important for all Iranians to come together, to put aside their differences and to show their support for 33 years of Iran’s Islamic Revolution — Wolf.

BLITZER:  Ivan, you’re in Tehran right now.  You’ve been speaking to lots of people there, I assume.

Do you get a sense that these international sanctions that have been placed on Iran are really having an impact, that they’re working?

WATSON:  Well, there has certainly been an intense devaluation, depreciation of the value of Iran’s currency over the last few months against the dollar.  It’s dropped, by some accounts, by nearly half its value over the course of the last four months.  And everybody I talk to complains about a sudden inflation in prices of just the most basic commodities, Iranian produced things like milk, that shouldn’t, in — in theory, be affected by Iran’s currency and its value against the dollar.

Now, whether or not that is caused by sanctions or by government policies, that’s not entirely clear.  It’s also not a subject that the government here wants to bring a lot of attention to, especially right before the election.

But it is hurting Iranians.  People I’m talking to are telling me that they’re in verge of — on the verge of losing their businesses, importers and exporters.  That hardship is being felt.  And it’s not clear whether the anger, as a result of that, is being directed at the government or at the U.S., which has led this new sanctions regime against Iran.

BLITZER:  Since getting there — I don’t know how long — how long you’ve been in Tehran now.

What have you been doing?

WATSON:  We’ve been traveling around town.  We’re — there is a fair amount of suspicion about us, as — as an American news crew here, particularly after the aftermath of those 2009 presidential elections, when you had unprecedented street protests that really challenged the legitimacy and the credibility of the Iranian government and a subsequent crackdown with a — a lot of human rights violations reported by human rights groups and — and activists, as well.

And also, we’re — this is coming at a time of heightened pressure and rhetoric between Iran and its rivals, the U.S. and Israel, where there is this talk of war again and again, which I think is raising some serious concern among ordinary Iranians.

Some of the suspicion?

We were detained on our first night out here, Wolf, when we were just filming campaign posters, by the Basij militia, held in a police station for about three hours.  We were trying to do what we were told we were allowed to do, which is ask about the elections.  And one of these Basij officers accused me of trying to hurt his government.

So that gives you a little bit of a sense of some of the sensitivities and the suspicion right now.

What’s fascinating, Wolf, is that the Iranians we’ve talked to, most of them don’t talk immediately about elections.  They’re still .

It’s important toed by the win of Iranian director, Asghar Farhadi, his best foreign film award at the Academy Awards last weekend, for his film “A Separation.” Anybody I mention that to, their faces light up.  That is a ray of hope for people at a time of increased isolation and international tension — Wolf.

BLITZER:  Ivan Watson is on the scene for us in Tehran, Iran right now.

We’ll check back with you.

Be careful over there.