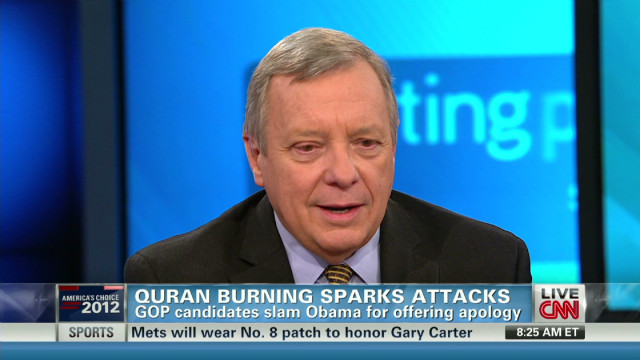 Majority Whip Sen. Dick Durbin (D-IL) appeared on Starting Point with Soledad O’Brien to discuss the flare up of violence in Afghanistan.

Durbin says, “And understand, just go back to history a little bit to 9/11, President George W. Bush, I sure had my differences with him, but I thought he got it right, and he stuck with it through his presidency. He said our war is not with the religion of Islam. Our war is with those who would distort it and turn it into terrorism. And I think that was a bright spot kind of a guiding principle. It was adopted by President Obama. Now, listen to these Republican candidates for president. They’re at war with Islam.”

CNN Contributor Will Cain counters, “Senator Durbin, I haven’t heard one thing that backs up what you suggest. Just give me an example, how are they at war with Islam?

Referencing the Quran burnings, Durbin replies, “Newt Gingrich saying that the president is guilty of appeasement…. What you listen to is incendiary rhetoric coming out in a very delicate situation. Lives are at stake here. The president is showing leadership. The president is stepping up, trying to calm a situation. These three candidates are coming on television doing the opposite.”