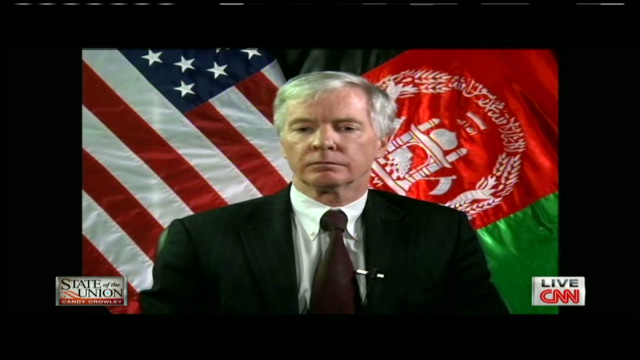 Amb. Crocker appears exclusively on CNN’s State of the Union

In an exclusive sit down on CNN’s State of the Union with Candy Crowley on Sunday, Ambassador Ryan Crocker, U.S. Ambassador to Afghanistan, discussed two U.S. military officers shot and killed on Saturday in the highly secured Afghan Ministry of Interior. Highlighted excerpts from the interview are below.

“The stakes, again, as I said, remain high. We decide we’re tired of it, al Qaeda and the Taliban certainly aren’t.”

“Tensions are running very high here. And I think we need to let things calm down, return to a more normal atmosphere and then get on with business. And it doesn’t mean we’re not doing business now – we are. With both military counterparts and civilian counterparts. Again these are terrible tragedies and very worthy of the condemnation they received. This is not the time to decide we’re done here. We’ve got to re-double our efforts. We’ve got to create a situation in which al Qaeda is not coming back.”

“The Pakistani government needs to take action for their own sake, as well Afghanistan’s and ours.”

For more on this story, please visit the CNN Security Clearance blog: Rising concern about killing of NATO troops by Afghan military