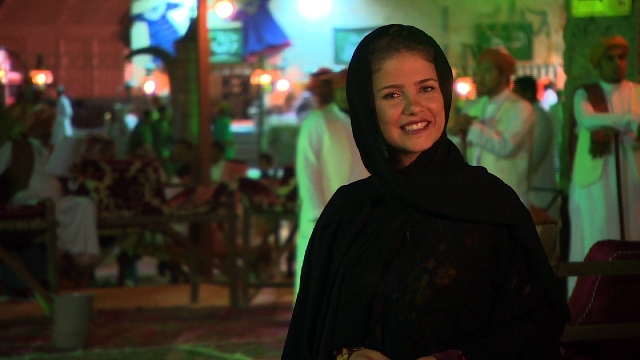 In March, ‘Inside the Middle East’ gets a rare look inside the kingdom of Saudi Arabia, a modern, oil-rich nation that is also home to two of the holiest cities in Islam – Mecca and Medina.

Host Rima Maktabi (pictured, top) puts on a traditional abaya – a long-flowing, black robe that women are required to wear in public – as she investigates the limits of personal expression inside the conservative kingdom.

From the capital, Riyadh, to the Red Sea port city of Jeddah, Maktabi discovers the challenges that many Saudi women face on a daily basis – from the driving ban to the inability to travel without the approval of a male guardian.

The programme also meets several young Saudis – comedians, “social media celebrities”, and contemporary artists – who are pushing the barriers of society through their popular, but sometimes controversial, crafts.

In March, ‘Living Golf’ comes from the home of Florida-born Lexi Thompson (pictured), the rising star of women’s golf. Aged 12 she became the youngest ever player in the US Open, won it at 14 and now, at 17, is preparing for the Kraft Nabisco, her ninth appearance in a Major Championship.

Also in the programme, European Tour winner and Ryder Cup player Andrew Coltart interviews his brother-in-law, world number two Lee Westwood, who gives his thoughts on the current state of the game, the Ryder Cup, Rory Mcllroy, and the Majors.

‘Living Golf’ looks at the controversy surrounding long putter clubs, the use of which Tiger Woods has called to be outlawed. The show speaks to those for and against the club, gets a demo from one of the game’s great putting gurus and hears from Adam Scott, who turned to using the long putter and won himself a World Golf Championship.

Plus, in the monthly feature ‘Hotshots’, the young, male star of US golf, Rickie Fowler, gives another insight into his shot making, and hot tips for players of any level.

The world of the America’s Cup is renowned for its secrecy. However, this month on ‘Mainsail’, CNN gains a unique insight into what life is like for those earning a living as a member of anAmerica’s Cup team. Host Shirley Robertson goes inside this private world, meeting Cup team ‘Artemis’ (pictured) at their base in Spain.

The programme takes a behind-the-scenes look at what the teams have been up to since the last event of the America’s Cup World Series in November 2011. Robertson speaks to the private design team that has been burning the midnight oil to shape a 72 foot catamaran for the finals, the build teams getting in place to create the machine and sailors practicing out on the water.

A year after the devastating earthquake and tsunami struck Northern Japan, CNN shares the country’s remarkable journey to recovery in a special week of programming, ‘Rebuilding Japan’.

Throughout the week, CNN looks at how the Japanese people are rebuilding their lives, what changes have occurred in one of the world’s biggest economies and what the future holds for power generation in a country where nuclear energy dominates.

‘Rebuilding Japan’ will feature live daily reports from CNN’s Anna Coren in Tokyo and the Tohuku region, as well as in-depth reportage from Coren, and correspondents Kyung Lah and Andrew Stevens from around the nation.

The week will also include in-depth feature interviews on ‘Talk Asia’ with Japanese football star Homare Sawa and one of Japan’s most respected business executives and founder of Uniqlo , Tadashi Yanai.  A special half-hour show, ‘Rebuilding Japan’ brings highlights from the week’s coverage.

‘Rebuilding Japan’ will also feature extensive online coverage and a special iReport initiative calling on people to share their photos and videos of life in Japan before and after the tsunami. The iReport initiative has already begun receiving submissions and can be accessed here: http://ireport.cnn.com/topics/744690 The best stories and videos will be featured on CNN.com.

Piers Morgan’s penetrative style of journalism is at the fore in his nightly interview programme, as he fires questions at a host of famous names in this exciting, surprising and unpredictable talk show.