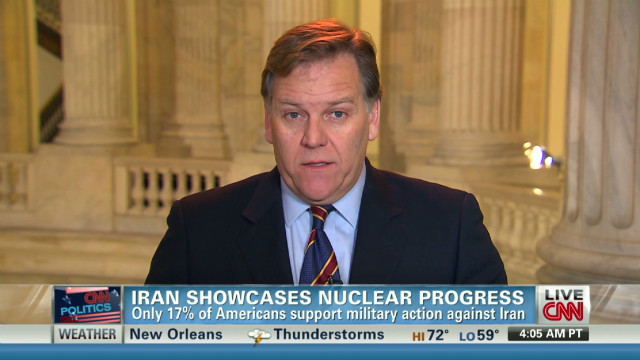 Rep. Mike Rogers on Iran: ‘Military options have to be laid on the table’

Rep. Mike Rogers (R-MI), chairman of the House Intelligence Committee, talks about how Iran’s nuclear announcement could have ramifications throughout the Middle East.

Rogers tells CNN’s Soledad O’Brien, “I think what you’re seeing is the aftermath of what happens when the sanctions are starting to bite a little bit.”

He continues, “I do think military options have to be laid on the table. They need to understand, we’re serious about this…. A nuclear Iran means nuclear proliferation across the Middle East. It’s a Middle East nuclear arms race. Turkey says they’ll get in. Saudi Arabia says they’re going to get a bomb. Egypt says if they have one, we’re getting one. And that really creates an instability problem that the next five generations of Americans will have to try to deal with…. That said, I don’t think military options ought to be our first course of action. They should really be the last course of action.”