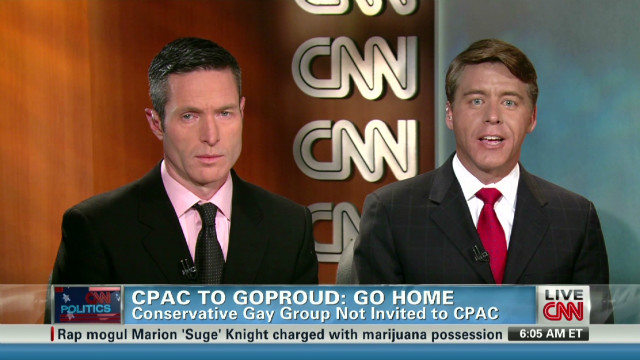 On Early Start with Ashleigh Banfield and Zoraida Sambolin, GOProud co-founders Jimmy LaSalvia and Chris Barron discuss their exclusion from this year’s CPAC and why Mitt Romney, not Rick Santorum, is the best GOP candidate.

Jimmy LaSalvia says, “There were folks… that wanted us barred from CPAC simply because we’re gay. And they took advantage of the leadership change at the organization and were successful in keeping us out this year.”

In response to Banfield’s question about Santorum’s stance on gay issues, Chris Barron says, “First off, we strongly disagree with what Rick Santorum said there. Those comments are absolutely outrageous. Secondly, Rick Santorum is not going to be the nominee of this party. I know that the mainstream media and some in the party want to continue the charade that there is a horse race going on here. Rick Santorum is not even on the ballot…. The bottom line is the only candidate who has a national organization that can win this primary is Mitt Romney.”

Early Start with Ashleigh Banfield and Zoraida Sambolin airs week mornings from 5-7am ET on CNN.