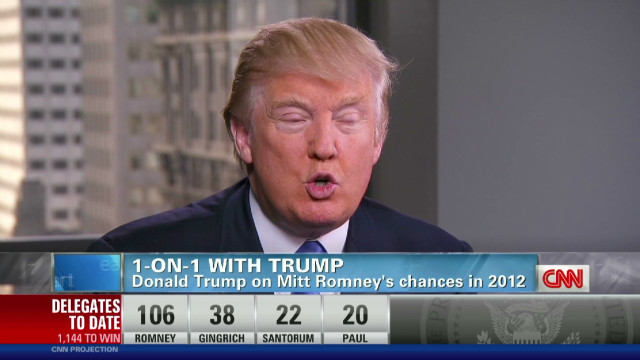 Donald Trump sits down with CNN anchor Ashleigh Banfield to discuss GOP candidates for president as well as what position he would want in Mitt Romney’s cabinet.

Trump says, “Rick Santorum was a sitting senator who in re-election lost by 19 points, to my knowledge the most in the history of this country for a sitting senator to lose by 19 points. It’s unheard of. Then he goes out and says oh ‘okay’ I just lost by the biggest margin in history and now I’m going to run for president. Tell me, how does that work? … That’s like me saying I just failed a test. Now I’m going to apply for admission to the Wharton School of Finance. Okay? He just failed a test…. And now he’s going to run for president. So, I don’t get Rick Santorum. I don’t get that whole thing.”

On a Romney cabinet position, Trump continues, “I don’t know maybe a position where I negotiate against some of these countries. Because they are really taking our lunch.”