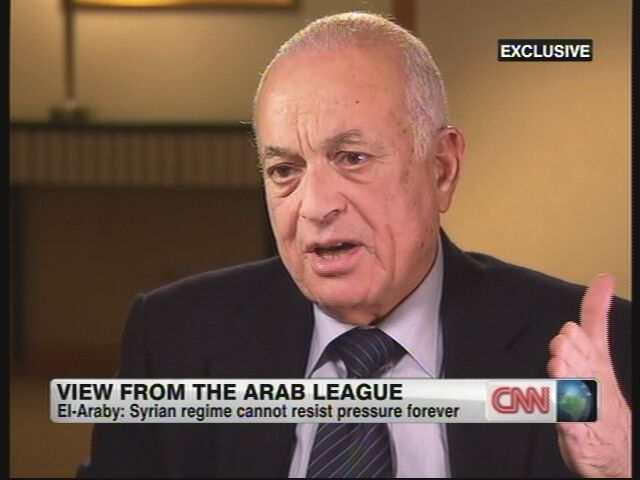 “If one person dies, our conscience cannot take that.” – CNN speaks exclusively to Arab League Secretary General Nabil el-Araby on the Syrian Massacres

In an exclusive and candid interview with CNN anchor and correspondent Hala Gorani, Arab League Secretary General Nabil el-Araby explains why he thinks the international community felt compelled to intervene in Libya but is not ready to do so in Syria, citing both the lack of oil and the global economic situation as potential reasons. He also discusses why Russia is opposing U.N. intervention in Syria and explains that “once the people will go on the street, you have to yield to their demands”.

*THIS IS A RUSH TRANSCRIPT. THIS COPY MAY NOT BE IN ITS FINAL FORM AND MAY BE UPDATED.

HALA GORANI, CNN INTERNATIONAL CORRESPONDENT:  What is exactly the language that’s bothering Russia right now?  When you’re in discussions with Russian representatives at the U.N., what is bothering them and what can be removed, as far as you’re concerned?

NABIL EL-ARABY, ARAB LEAGUE SECRETARY-GENERAL:  Well, I’ll tell you what they say, I mean, and they have said it already.  They do not want any reference to military intervention and no one is speaking about that.  They don’t want any reference to sanctions, and no one speaks about sanctions as such.  They don’t want the Arab peace plan, which says that the president delegates power to the vice president.  We didn’t ask that the president should step down, but only to delegate powers to the vice president, which actually, according to their constitution—

GORANI:  You know, there is a joke now that says Bashar al-Assad is going to demote himself to vice president.

GORANI:  Because that’s how seriously people are taking this, you know?

GORANI:  Right.  They’re saying it’s just toothless.  It’s going to lead to nothing.  This regime is going to continue to employ violence, because it’s the only way it knows to deal with opposition.  Do you think that’s true?

EL-ARABY:  Well, up to now, it’s true, but you have to refer that to the world we are living in.

GORANI:  And if this resolution is passed and Russia removes every little reference to possible sanctions, possible intervention, possible pressure, then what good will that resolution do?

EL-ARABY:  It will still put pressure on the Syrian government, because they realize that Russia cannot stand up forever.  And they are under great pressure now.  And you know, Russia does not want to be against the people.

EL-ARABY:  Yes, yes, people are dying.  And even one – if one person dies, our conscience cannot take that.

EL-ARABY:  It’s awful.  It’s awful.  But you tell me, what can be done?  And more than that, you are going to a universal organization, which is responsible for world peace.  Security Council is the organ vested with the primary responsibility for the peace and security in the world.  You cannot go further than that.

GORANI:  People will say, why was Libya a case that the international community thought required intervention because a massacre was about to take place – I’m quoting people.  Whereas Syria is a country where a massacre is taking place, and there is no intervention.  Why?

EL-ARABY:  Well, I’ll try to answer but it’s not – my view, personally, but I’ll give you some examples.  First of all, at one time, Gadhafi’s Saif al-Islam threatened that he was going to wipe out the whole city of Benghazi.  And they had the means to do that.  Secondly, you can say that the – as I said to you, political location is different here and there, between Syria and Libya.  Thirdly, in Syria, there is a regular strong army.  In Libya, there was no army, just some militias headed by Gadhafi’s sons, which, I mean, is completely different.  And maybe there is no oil in Syria.

GORANI:  So what are you saying when you say maybe there’s no oil in Syria?  That the economic motivation was there?

EL-ARABY:  Could be.  Could be.  But anyhow, we can add to that that this is an election year in the United States and there are elections in France.  And Europe is not in the – I’m not going to say bankrupt, but is not in the best economic situations to enter into such a venture.

GORANI:  When you look at Syria, what – I mean, you say you have hope, but what then gives you hope?  What aspect of what’s happening right now is giving you hope?

EL-ARABY:  The fact that such, I mean, the regime itself is under pressure from the international – and they cannot go on forever.  And once the people go to the street anywhere, and actually I told – I am saying this in public because I told the leadership in Syria, that once – the lesson from Egypt and from the others, but I speak as my own country – at that time I was foreign minister, as you know – that once the people will go the street, you have to yield to their demands.

CNN is the world’s leading global 24-hour news network and one of the world’s most respected and trusted sources for news and information. The CNN brand is available to two billion people via 18 CNN branded TV, internet and mobile services produced by CNN Worldwide, a division of Turner Broadcasting System Inc and a Time Warner company. CNN International is the international directorate of CNN Worldwide and distributes news via 14 services in seven different languages. CNN International can be seen in more than 280 million households and hotel rooms in over 200 countries and territories worldwide, including over 44 million across the Asia Pacific region and online at www.cnn.com/international

Keep up to date with all the latest social media updates from CNN at: