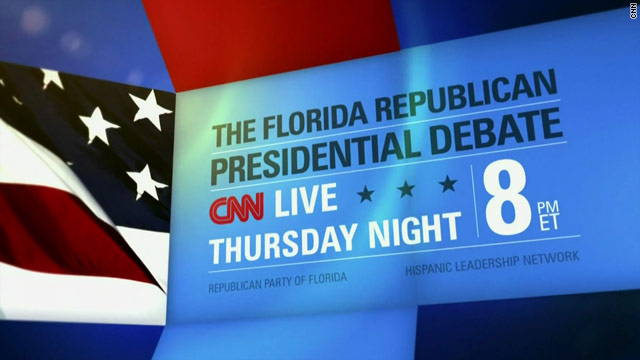 GOP Candidates to Appear in Last Debate before Florida Primary

Just days before Florida Republicans go to the polls to choose their nominee, the GOP presidential hopefuls will meet for a final debate hosted by CNN, the Republican Party of Florida and the Hispanic Leadership Network. CNN lead political anchor Wolf Blitzer will moderate the two-hour presidential debate which will take place at the University of North Florida in Jacksonville on Thursday, January 26 at 8 p.m. ET.

CNNPolitics.com will cover the Florida debate and primary and will be the online destination for all news and analysis related to the 2012 Elections. Users can check out the CNN Election Centerto track real-time election results and analyze the exit polls and results thus far from Iowa, New Hampshire and South Carolina. CNN.com has also launched the GOP Delegate Calculator, which allows users after each caucus or primary to try their hand at predicting which candidates will win each state and eventually, the Republican presidential nomination. CNN.com will also continue to provide the CNN Electoral Map with the most recent predictions on battleground states as updated by CNN’s political experts as well as the 2012 Primary Caucus Calendar, an interactive datebook where users can slide over a specific month to see when states will hold their primaries and caucuses throughout the year.

CNN.com will live stream all of the events in Florida – the debate on Thursday as well as the events from the Florida primary next Tuesday. After Thursday’s debate, CNN.com will be live-streaming the Spin Room with CNN’s Jim Acosta. To engage and comment on election night news as it happens, users can view the CNN Politics Facebook page for political stories and photos of CNN’s favorite faces and also follow @CNNPolitics on Twitter for breaking developments all night.

CNN iReport, the network’s global participatory news community, will be asking for submissions related to the events in Florida, some of which will be shown on CNN.com and broadcast on CNN.

CNN en Español will offer pre-debate analysis starting at 7.45pm hosted by anchor Juan Carlos López and joined by the network’s panel of political contributors Maria Cardona, Roberto Izurieta and Juan Hernandez. At 8pm, the network will carry the debate live with simultaneous interpretation and will feature López fielding questions for the candidates from attendees of the Hispanic Leadership Network Conference taking place in Miami. The debate will be followed by 30 minutes of analysis with our political contributors and guests onsite in Miami.
The debate will also be carried live on CNN International.