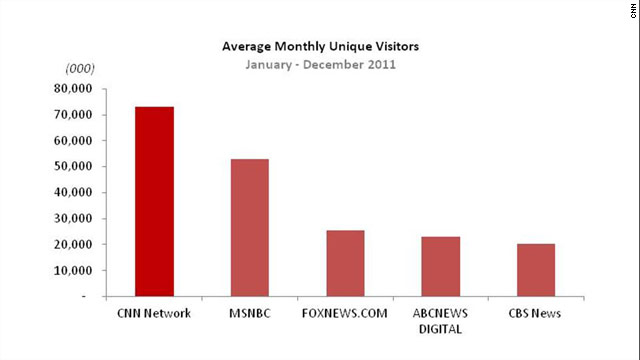 In the wake of the Japanese Tsunami, CNN.com’s most trafficked day of the year was March 11, 2011 with 135.9 million global page views.  Click here for the top ten events for the year.

With nearly 1 million more fans than Fox News and 8 times as many fans as MSNBC, CNN’s Facebook fan page has the most followers of any news brand. On May 1, 2011, CNN had the highest number of interactions ever recorded in single day – over 42,000 likes and comments related to the death of Osama bin Laden. (Source: Facebook Insights)

On Twitter, @CNNBRK and @CNN have a combined total of over 9.4 million followers. @CNNBRK, with over 6 million followers, is the No. 1 news account on Twitter, 1.8 million more followers than its closest competitor, The New York Times. @CNNBRK also ranks as one of the top 25 accounts on all of Twitter. @CNN’s most popular tweet of 2011 (the death of Osama bin Laden) was re-tweeted more than 10,000 times. (Source: Twitter Analytics)

CNN is also home to iReport, the No. 1 participatory news community online. By adding more than 250,000 registered users in 2011 (up 11% YOY), the community has grown to over 1 million iReporters. At a 19% growth rate over 2010, more than 185,000 iReports were submitted last year. iReport set a monthly record in August with the addition of 38,000 registrants and a daily record with 8,000 new iReporter registrations on Aug. 23. (Source: iReport Internal Server Data)