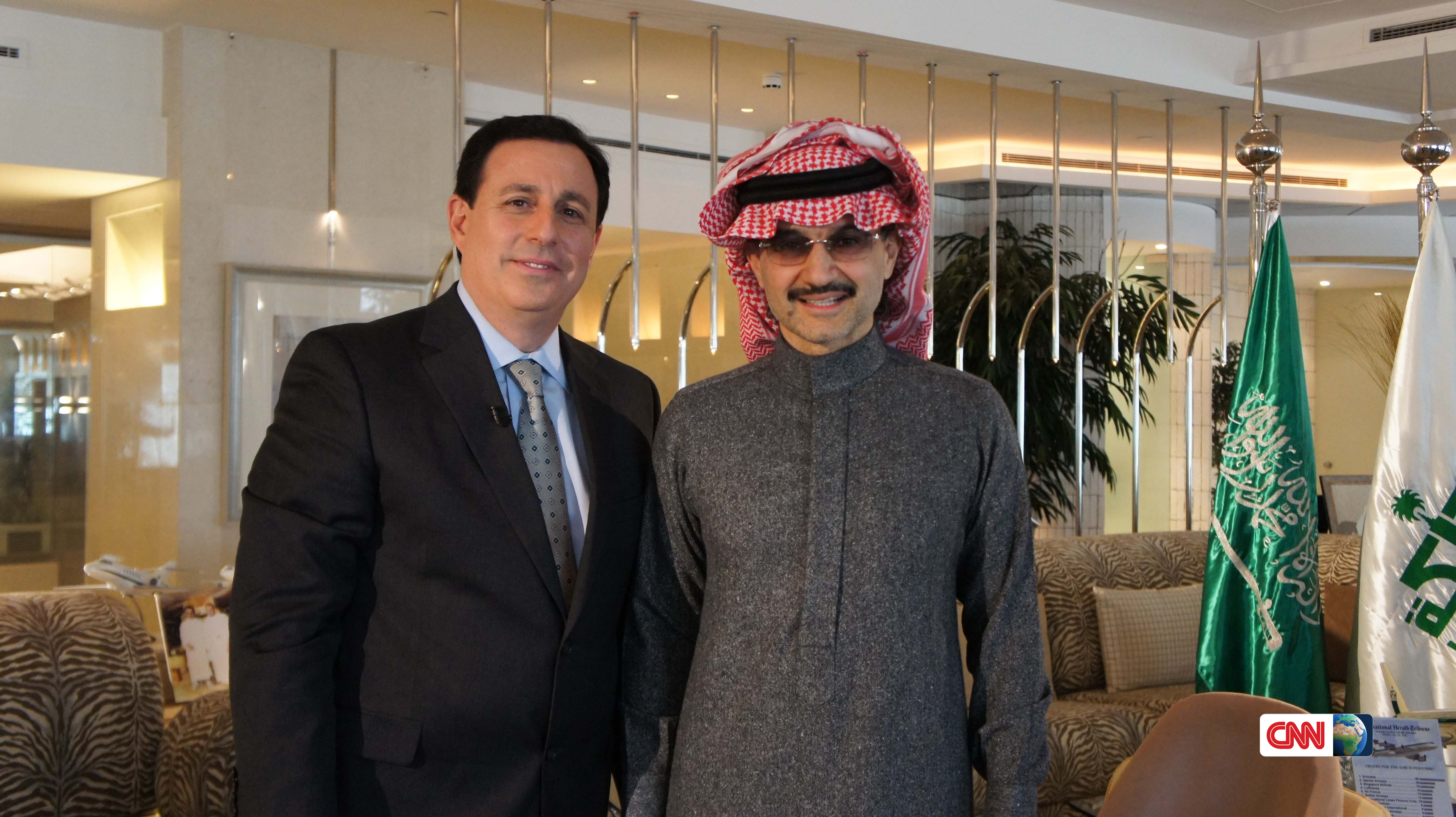 Prince Alwaleed: No doubt the revolution impacted tourism. But I can really confirm that we’ve seen the bottom of it in 2011 and right now we’re already seeing indications that as 2012 commences we are seeing improvements in the tourism industry in our region here.

CNN anchor, John Defterios: The changing governments we’ve seen inLibya,Tunisia,Egypt,Morocco, the rise of the Islamic governments, can they be business friendly in the region? What do you make of the change politically?

Prince Alwaleed: See, we are getting into unchartered territory. We cannot really judge where we are heading, because we are seeing still now in Egypt and Libya, we’re still seeing a lot of the aftermath of the revolutions, although there are some early indications in Tunis that show they have the stability and going back to normal life is beginning to happen. But clearly we cannot judge this too early you know. Some of the negotiations may take 30 or 40 years, we hope that is not the case in our region, we hope that we have stability and tranquillity and things go back to normal as quickly as possible.

Defterios: So we don’t know if it’s a pro- business environment or not but the rise of the Islamic parties that have scored extremely well in parliamentary elections

Prince Alwaleed: There is no doubt that the Islamic path or the Islamic factor is beginning to play a role right now. Now I believe that they have no choice but to be more friendly because they would like to continue to be ruling their countries. To continue that they know they have to work on their economy and employment and benefit their people but right now I think a form of capitalism, a new form of capitalism, with mix of Islamic kilter is something that you have to live with for the coming years to come.

Defterios: Closer to home, on domestic policy, a very direct question about King Abdullah as a reformer. Will the reforms outlive him eventually?

Prince Alwaleed: Those countries in the Arab world, no matter what they are, monarchies, or republics or emirates. Those that didn’t get the revolutions they should at least get the message of the revolutions, or messages of the revolutions.  And they need to not only change and make reforms at the financial or at the social level but they have to do it at the political level also. It’s very important because the matters right have witnessing and seeing all that is happening around them. And I believe there is no choice but forSaudi Arabia and whoever might succeed King Abdullah, God forbid, after he lives long, but they have to go there with the reformed path and transcend them to political reforms in our region.

Defterios: A year ago there was belief here, in theRoyal Court, that there was not a consensus to take military action. A year later it seems to be an inevitable move to keepIran boxed in with sanctions and to not try to block the Straights of Hormuz.

Prince Alwaleed: I don’t believe the word is ‘inevitable’ in betweenIran and the States or the rest of the world, and I don’t believe theHormuzStrait will ever be closed.Iran knows this is suicide. PlusIran knows very well, well, what happened next door to it. To its West. We know what happened to Saddam Hussain andIraq. So this is still very vivid in their mind. I believe that theUnited States engaged withIran, talk to them, and see what you can do with them. I think they want the recognition.

Defterios: It was interesting, in an interview with this programme just over a week ago, the oil minister said Saudi Arabia will in fact provide up to two and a half million barrels a day to protect the energy market. Is that a wise move? The Iranians have suggested that the Kingdom should rethink that strategy?

Prince Alwaleed: It’s not only wise, this is a very political and strategic freeze from our oil minister, who reflects really the views of King Abdullah. For Saudi Arabia to come public and say we’ll flush as much oil is needed, to compensate for any potential loss of the Iranian oil, that’s a big message to Iran, that – you know – ‘don’t keep threatening the world economies with the close of Homuz. Because we will, if push comes to shove, we will compensate for all that you have. That’s a big message for the market also that we will maintain the $100 that clearly seems to be good for the consumers and good for the producer.

Prince Alwaleed:  Kingdom holding is not new to the internet and technology arena. We are the first to be invested in Apple computer, we invested when Apple was below nine dollars, we were the first to invest in Amazon, and eBay. We clearly believe we did not come at the very earlier stage but clearly we don’t believe we came at the plateau stage. We came where we see this company’s viability, companies by ability and continuity and resilience will be there in the coming decades to come. And that’s why we propose to be an investor there.

Defterios: Do you feel comfortable with Apple after Steve Jobs and his tragic passing? Will it remain as innovative in the future as it was the last decade?

Prince Alwaleed:  As you know, Apple began facing competition even during the lifetime of Steve Jobs. And I believe that Steve Jobs is a genius, really. By establishing a company who can really outlive him and continue with his path. And the early indications are the new management that took over after Steve Jobs are implementing and executing pretty well. I hope that this will continue but judgements stood out and we have to see how the coming months and years will play for Apple and to remain as the most competitive company in the world, with all this iPod, iPhone, iPad etc.

Defterios: You came out and supported, in fact, Rupert Murdoch during the upheaval, the media storm around Newscorp in the past year, but is it time to be less of a family operation and more of a publically traded company with the make up of the board, passage of information and governance for Newscorp in your view?

Prince Alwaleed:  Look, Newscorp has is important directors, it functions more with directors.

Defterios: Some say it doesn’t function that well, actually, to be fair.

Prince Alwaleed:  Look, whenever you have a dominant person, that’s  established a company, it’s inevitable. And let’s be honest about it,  some people talk about my company like that. To be honest with you, I’d have to transfer that fromSaudi Arabia because I establish the company Kingdom Holding because I am very much involved in the daily process, they believe I am so dominant. That’s not the case. We have directors, we have an invisible committee, no decision is taken until we have a consensus. I don’t believe in that at all.

Defterios: The other thing I want to talk to you about is your new news channel, which is going to launch at the end of 2012 Al Arab. You’ve chosen to go intoBahrain, which has had its own challenges with the Arab Spring on the Eastern flank ofSaudi Arabia.

Prince Alwaleed:  I see that one of the channels is very much the masses channel. Which is Al Jazeera, and one of them, and another is very much the government channel. Although right now with the revolutions they had to really move a bit to the centre. I believe there is an opening for a more pragmatic and logical channel that really takes the centre’s point of view really. We do it because Bahrain is the place that has a lot of good people, small people , educated people that could fit very well in our new news channel that we  are broadcasting as 24 hours and would compete with the two main channels we have now in the Middle East.

Defterios: What are your thoughts about the European debt crisis? Is it going to create a slow growth environment for another decade because of the debt load and the lack of restructuring, particularly in southern Europe andIreland?

Prince Alwaleed:  What is happening in Europe is Europe is now paying the dues and paying the fees of their – they’re going across the board in their finances, but clearly what is happening now in Europe in general, clearly Europe has to get out of this debt crisis, it’s going top take some time. No doubt this will put a lid on growth for the next, at least, four – five years and depending on how strong they are on getting out of this debt problem that they have right now. This will depend on the strong leadership that the 17 countries in the euro currency, that – the decision they will take. But I think this will dampen growth for at least I’d say, half a decade.

Prince Alwaleed:  No, we’re not even go down that.. it’s too much headaches. Too much problems. Too much uncertainties. And there world has a lot more opportunities to look at, there are a lot more clearer, and the path forward is a lot more established. We’re not going to get into really that quagmire.

Defterios: Would you suggest the same inAmerica right now? Are you pulling assets out of theUnited States, so you have the same concerns about theU.S. debt crisis?

Prince Alwaleed:  No, I always said that, unfortunately, if theUnited States on one hand, on one side of the Atlantic and Europe is on the other side of theAtlantic, they’re competing whose worse. They’re competing who has the worse economy, frankly speaking. But after the election the States have to make very tough and rough decisions to review its cumulative debts, that’s switching now to always 100% of it’s GDP.

Defterios: Does that undermine its position as the reserve currency? You’ve seen the deals thatChina is doing with individual countries and had to trade in the RIM MB.

Prince Alwaleed:  I think for the foreseeable future, the dollar will remain as the main currency of the world. No doubt about that. Having said that, we have to accept the fact that eventuallyChina will be a force to be reckoned with and its currency will be stronger as days go by. But also remember,China has its own problems. Clearly they have more three trillion dollars of foreign reserves. The economy is doing well, growing at seven – eight per cent, sometimes, nine per cent. But alsoChina has a lot of potential social problems also. You know, all the growth is happening in the East coast ofChina. But the more you go to towards the west, things there deteriorate substantially, and the GDP capita there, which is one or two – three hundred dollars, which is not whatChina wants

Defterios: Let’s see if we can clear something up with regards to Citi Group, as it’s known today. You’ve been a long term investor but because of its being hampered by theUS debt crisis, how much damage has it done to the overall holdings? I’ve read pieces that suggest that your $21million empire is closer to $10. Can you clear up where we are today as a result of the Citi Group damage?

Prince Alwaleed:  No really, look we have been living with Citi Group since 1991, with all of its ups and downs. Clearly Citi Group went through a major crisis but I believe right now, with Vikram’s leadership, it was over for Citi Group and I believe that Citi Bank is going to begin being dividends in 2012, if not, begin being shared by a back program. So really, you know, Citi Group really is a force to be reckoned and it’s the only bank right now who’s global. You will see that the best deals City Group have are yet to come.